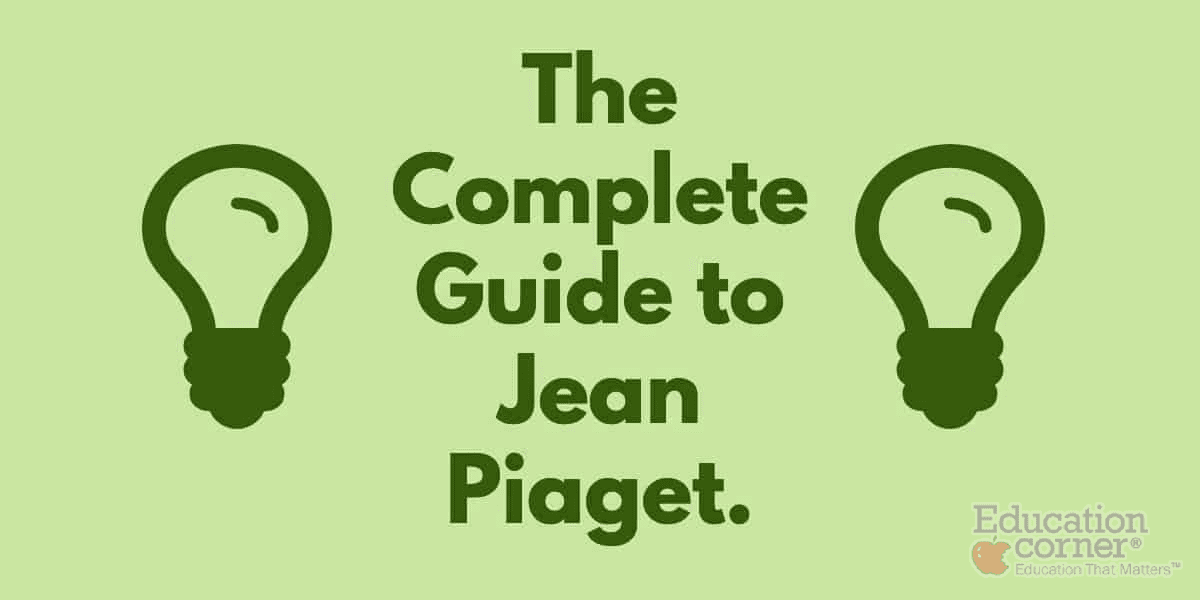 Who was Jean Piaget?

The name Jean Piaget is synonymous with cognitive development where he has developed a well-known theory for it. He started his life in Neuchatel, Switzerland on August 9, 1896.

As with most educated people, who are often inspired by those educated people with whom they grow up. In Piaget’s case, his father was a historian and it was his grandfather who sparked his interest in philosophy and biology. Even before he obtained a doctorate in Natural Sciences (1), he conducted studies with molluscs at the tender age of ten.

He continued his studies and ended up investigating psychological illnesses in later years. All these studies combined and allowed him to invest time in psychoanalysis, which eventually led him to his studies in children’s mental growth and development.

In his studies in this field, he identified four stages of mental growth in children (2), His studies in cognitive development became, and still is, an invaluable asset to teachers all over the world.

In order for Piaget to establish this long-standing influence on many consequent studies as well as on various establishments, he was influenced by many of his peers and colleagues.

Many of these had their own reputations of excellence in society.

Elizabeth Hall, for example, in an interview with Piaget, placed him and Sigmund Freud on par. Even though this created a stir, his work stands out in a different way than the rest (3), Thus, one should look at his work as a stand-alone entity in terms of its far-reaching influence.

He is, therefore, not above other psychologists and philosophers, but on par with them and should be regarded in this way.

His work at Alfred Binet’s institute was of incredible value to his work as he was able to watch and carefully note down his observations (4).

Others who had a major influence on Piaget’s Theory (of Cognitive Development) were men such as James Mark Baldwin (an American philosopher and psychologist), Pierre Janet (a French neurologist, and psychologist) and C. H. Waddington (a British embryologist) to name a few.

Each had a significant impact on the way in which Piaget conducted his studies and conclusions.

Even though Piaget had a significant impact on his theory, others, such as Lev Vygotsky developed their own as well.

What Is Piaget Known For?

In contrast with many in the field at the time, Piaget focuses only on children, secondly, he talked about development rather than learning and thirdly, his is a cyclic stage theory, not a linear progression theory.

OK, so what does that mean?

Piaget summed up his own theory in this way:

Piaget included the concept of the “schema” into his theory. What this means is that the child develops a mental pattern to understand his or her world. In addition, the child can use other templates or patterns, adapt it and use it in conjunction with his or her own schema that was constructed using their own experiences.

These experiences have been acquired through assimilation and accommodation.

A second aspect is that of equilibration. Equilibration is part of all 4 cognitive stages as it urges the child on through the stages of the learning theory. Assimilation causes a shift in world view. If the schema isn’t developed enough to allow assimilation, accommodation occurs. In accommodation, the Schema needs to be adapted.

Once the schema has been changed it returns to equilibrium. Therefore, learning is a constant cycle of Assimilation; Accommodation; Equilibrium; Assimilation and so on.

This cycle takes place within each of Piaget’s stages of development.

Even though Piaget’s Theory of (Cognitive Development) may have some gaps, the overall use of the theory is invaluable in the classroom (7).

Piaget developed the stages by following the children and coming to the following conclusions (6):

Babies are born into the world and immediately become aware of their surroundings through their senses. These senses include the sense of hearing, smell, sight, touch, and taste.

They explore the world through the movements of their bodies, which are reflex movements at first. it turns into exploratory movements later on in the stage. The term for this gathering of information is called the sensorimotor stage.

This is the stage where they discover textures, recognise people, objects, and different sights, and learn emotions as well.

Up to this point, the child has established that objects remain a reality regardless of whether one can sense it through any of the five senses.

From this point onward the stages of learning theory include the development of language skills and abstract thinking. This is done through various means such as imitation, drawing, imagination (mental imagery) and verbal expressions of thoughts (evocation).

During this stage, it is important to note that the child operates from an egocentric perspective.

At this stage, the cognitive development of the child demands a less egocentric approach. The child becomes more concrete and logical in their thinking. As more rational beings, they are able to understand aspects such as conservation.

This means that an object can remain the same even if it changes shape, size, height or volume (for example an object such as water).

The eleven-year-old now has many skills to build upon. This is the operational stage where the child establishes the final cognitive learning skills that include finding solutions to problems, use logical reasoning and are able to understand abstract concepts.

They are now able to use deductive reasoning to analyse situations and other aspects of the environment. The eleven year old (into adulthood) can now find possible solutions and new theories based on prior knowledge.

Jean Piaget focussed on the cognitive experiences of the child in a world connected by objects and people and the recognition of these.

Piaget developed his theory of (cognitive development) through a close study of children. He made extensive use of note-taking in order to make comparisons and the analysis of all his observations.

His observations centred around children and how they developed from birth to adulthood. This created an extensive study that has been used for decades.

In contrast to that of Piaget, Lev Vygotsky focused on the social interaction of the child. His theory is thus known as the Social Development theory.

His theory is in some ways similar to the explanation of Piaget’s theory even though Vygotsky incorporates a social connection between people in the form of teachers and peers – that is, a similar guide to knowledge as Piaget suggested.

However, Vygotsky regarded the (social) experiences children have as tools that can lead to developing their thinking skill (5). Vygotsky was right, in many ways, but it is the combination of the two theories that would make the classroom a place of learning for the children of all age groups or the stage of development.

Furthermore, Vygotsky also does not provide the educator with clear guidelines as to what the next step of learning should be as Piaget’s stages of development do.

Whilst both Piaget and Vygotsky both made huge leaps forward in pedagogical practice, I believe the more recent work by Barak Rosenshine; Principles of Instruction, is more relevant to today’s educators.

CLICK HERE for to find out more about Vygotsky

How can Piaget’s theory be used in the classroom?

By following the various stages and noting where each child or group is in the classroom, would assist greatly in determining the next level of teaching. This is the reason why schools are divided into different classes.

There is a distinct division in cognitive development programs for different age groups.

This is seen in the explanation above through the 4 stages of learning theory in Piaget’s theory. The role of the teacher in the classroom is to guide the students through the cognitive stages.

One way to apply this is through activities instead of simply imparting knowledge. Students should be engaged to actively participate by providing their own ideas, giving their own opinions, and making suggestions.

The various stages of cognitive development will also dictate what supplementary materials will be required for each classroom. The most important part of this application would be a hands-on experience for students.

Why is Piaget’s theory so important?

For a complete education one could have a look at aspects of the Vygotsky theory and incorporate it into the Piaget theory as well. As the discussion indicated, however, and how Piaget’s theory works, one could perhaps conclude that Piaget’s theory would include social development as well.

This is particularly in light of the fact that there is active participation between student and teacher, as well as with fellow students. This is also seen in the fact that humans are social beings.

Piaget’s theory of (cognitive development), his stages of development, and in particular his 4 stages of learning theory were and still remain an integral part of many school curricula.

It is a means of guiding teachers and other educators to guide students through their cognitive learning experiences.