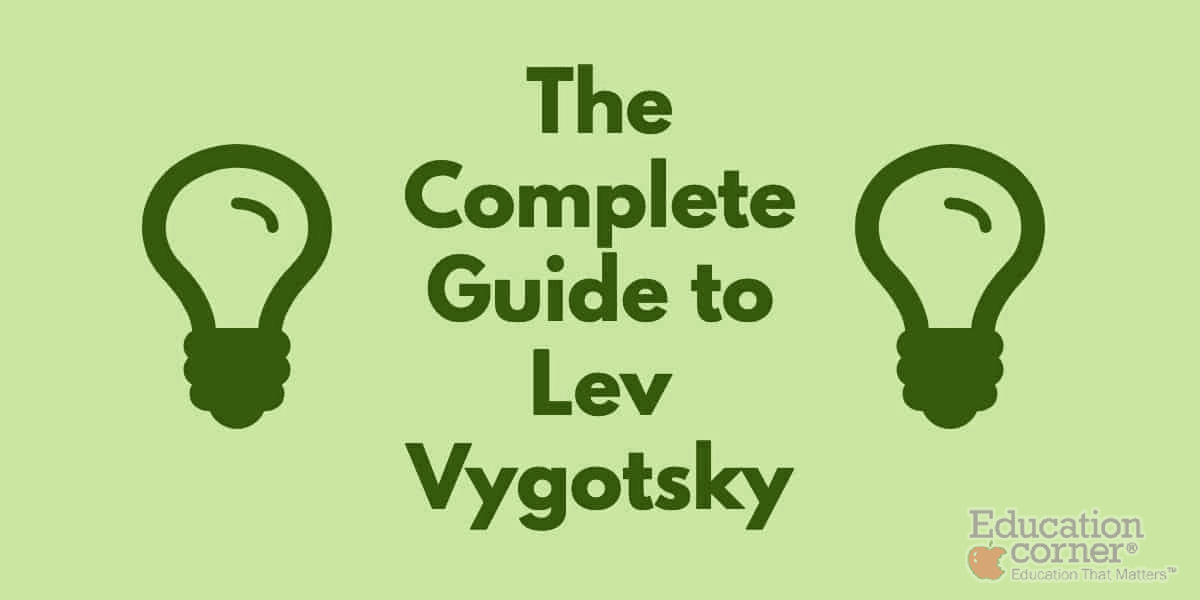 The name Lev Vygotsky is well known to most teachers, his work has been the basis of modern evidence based education research.

What are Vygotsky’s learning theories?

Who was Lev Vygotsky?

Lev Vygotsky’s influence in the field of developmental psychology is all the more extraordinary given his relatively brief life, cut short by tuberculosis at the age of 37.

Born in 1896 to a middle-class Jewish family in pre-revolutionary Russia, Vygotsky demonstrated intellectual aptitude from a young age. His formal education included being homeschooled, attending a Jewish school, and later being admitted to Moscow University under a quota system that ensured that three per cent of the admitted students were Jewish.

His intellectual interests at this time were wide-ranging, including, but not limited to, psychology. In his late 20s, however, he focused his academic work on psychology, completing a dissertation in 1925 on the psychology of art (a typically interdisciplinary topic for a thinker of such wide and varied interests).

He received the degree in absentia because of a dramatic recurrence of tuberculosis that nearly claimed his life. Although he recovered from this episode, the disease took his life less than a decade later in 1934.

What is Vygotsky known for?

Zone of Proximal Development (ZPD), More Knowledgeable Other (MKO), Scaffolding and Social Learning Theory. All of these are described in this article.

Zone of Proximal Development (ZPD) is a term that represents the area of knowledge beyond what an individual currently has but is capable of apprehending. Most often used in conjunction with children, it describes those concepts a child is capable of learning and are within their grasp, but haven’t yet been attained.

If one pictures the ZPD as a zone surrounding the child’s current understanding, the lower limit is the point at which the child can gain understanding through their own efforts. The upper range of the zone are those concepts a child is capable of understanding, but which are out of reach unless another party intervenes to assist the child in gaining this knowledge.

A key ramification of this concept is that learning is not based solely on the development of a child’s cognitive abilities prior to learning. Rather, the learning process itself fosters cognitive development.

Which leads us on to:

The idea of a “More Knowledgable Other” (MKO) works hand-in-hand with the concept of ZPD. This individual is, as the term itself suggests, a person who knows more about the concept being learned than the child does.

The most obvious examples of such a person are parents and teachers, but they are not limited to those groups, nor do they need to be adults. Peers can also be an MKO if they have a greater command of the concept than the child does.

An MKO serves as the means by which a child can learn and understand concepts beyond what they might be able to grasp if left to their own devices. It is through this process that cognitive development happens via learning rather than something that must happen prior to the learning process. Attaining the ability to learn a concept and learning can happen simultaneously rather than one after the other.

The MKO is the primary way in which a child can stretch their understanding beyond their current abilities by providing guidance and feedback.

Both ZPD and MKO can, retrospectively be seen as Metacognitive strategies.

Part of the ZPD, Scaffolding includes activities provided by the MKO. These activities support the student as they move through the ZPD.

The level of support is gradually reduced as the student becomes more competent and confident. It is known as scaffolding as it is analogous with how scaffolding is removed from a building as the construction becomes complete.

Ultimately, all scaffolding is removed and the student is able to complete the task again on their own.

Vygotskian scaffolding is also an integral part of Rosenshine’s Principles of Instruction.

Vygotsky on Language and Thought

Perhaps Vygotsky’s most dramatic and far-ranging ideas centred on the role of language’s relation to thought and consciousness.

Vygotsky felt that while a child learned external language (i.e. spoken and, eventually, written language) at a young age, this language use was eventually internalized and created the mental landscape of consciousness itself.

At early stages, children quite literally “think out loud,” using spoken language to grasp concepts and reason through them. However, this increasingly becomes an internal process (“inner speech”), ultimately leading to cognitive processes that are dependent upon language, but no longer closely resemble the external language of spoken and written words.

Yet, as a product of linguistic development, thought (including consciousness in its narrower sense of full self-awareness) was ultimately created socially.

Vygotsky on Individual and Society

When the consequences of these ideas are unpacked, it is easy to see how Vygotsky came to the view of the individual/social relationship that he did.

For Vygotsky, the individual was neither a self-contained agent navigating the social world, nor were they a bundle of embodied responses to stimuli around them created through society. Rather, the individual and society existed in an interactive relationship, with each affecting the other.

Society affected the ways individual human beings developed in profound ways, making it difficult to identify universal patterns of development. However, the individual was not a passive participant in this process, but could (to greater or lesser degrees) influence the social environment around them.

Vygotsky’s deepest philosophical inheritance was from Baruch Spinoza, the seventeenth-century Dutch philosopher. In particular, Vygotsky drew on Spinoza’s interest in the topic of consciousness and the role of emotions in thought.

Vygotsky was also influenced by the philosophy of Karl Marx, whose focus on the connections between the material world and human thought were highly influential to Vygotsky, particularly early in his career.

Additionally, Sigmund Freud and Ivan Pavlov’s ideas set the stage for Vygotsky. While also contemporaries, these two thinkers were significantly older than Vygotsky.

Freud’s emphasis on the importance of childhood experience in the creation of the personality and the role of emotion in consciousness anticipated Vygotsky’s focus on childhood development and the place of feelings in cognition.

Pavlov’s interest in the interplay between external symbols and internal states of mind can be linked to Vygotsky’s notions of the social role of language in the creation of consciousness. More importantly, Pavlov’s interest in applying psychological insights to learning theory closely mirrors Vygotsky’s.

Who Were Vygotsky’s Contemporaries?

Vygotsky’s brief life overlapped with that of notable psychologists such as Freud, Pavlov, William James, John Dewey, Wolfgang Kohler, and B.F. Skinner, However, Vygotsky’s most notable contemporary was Jean Piaget.

Not only were they of the same generation of psychologists and have similar interests, but their ideas offer a clear study in contrasts. While both shared a keen interest in how thought develops in children and how learning happens, they came to significantly different conclusions on a number of issues.

Piaget placed a greater emphasis on peer interaction as a means of cognitive development than did Vygotsky. As noted above, Vygotsky certainly felt peer interactions could be crucial, but primarily to the extent that peers played the role of the “More Knowledgable Other.”

This role was played more commonly by important adults in the child’s life, such as parents and teachers.

The two also had different ideas about the role of society in the formation of the individual. As we have seen, Vygotsky felt that society played a key role in development and that the nature of this role differed from culture to culture. Piaget, however, felt that development was more universal.

While not unaffected by society, cognitive development was something that followed a relatively standard path regardless of the social surroundings of the individual.

An offshoot of this is that Piaget formulated a codified series of steps that he felt development moved through, while Vygotsky’s saw this process as too flexible and variable to be broken down into standard steps that always followed one another in a predictable order.

Perhaps most important was the fact that Piaget’s theories said relatively little about the role of language in cognitive development, while it was absolutely central to Vygotsky.

Vygotsky’s influence was fairly minimal for the first several decades after his death. His ideas fell out with Soviet thinkers, who were often critical of them. Beyond the U.S.S.R., few translations from Russian were available. Above all, Vygotsky’s early death left many important aspects of his mature thought unfinished.

While his work was known beyond his homeland, Vygotsky was not terribly influential beyond a circle of followers in the U.S.S.R. Gradually, however, his works gained traction in the late 1970s and 1980s. In particular, his ideas influenced a number of thinkers about classroom learning.

This has not been without some questions, however. The unfinished nature of Vygotsky’s later work has led to many “Vygotskian” concepts having a dubious relationship with his actual written work, with liberal–even fanciful–elaborations on his ideas falling under the banner of “Vygotsky Studies.”

However, whether or not Vygotsky himself did or would have articulated the ideas that have emerged since his death and are associated with him, his work has certainly operated as a catalyst for further thought in the area of childhood development and learning.

Vygotsky’s ideas have become increasingly important in the last few decades in the field of education.

Given the centrality of the “More Knowledgable Other,” Vygotsky’s concepts place particular importance on the role of the teacher as the catalyst not only for learning but for cognitive development.

A concrete example of a Vygotskian approach to learning is the concept of “scaffolding,” in which a learner first learns concepts and skills that then enable them to reach a second, higher tier of concepts, and so on, until at last mastery of the overall skill or idea is attained.

It is through this process that a learner progresses through the ZPD, learning not only content but also *how to learn* about the content, enabling them to reach higher levels of understanding.

Another specific application is the use of peer-to-peer learning. As noted, an “MKO” need not be an adult teacher. Peers who have a greater command of a topic or more developed skills can serve as MKOs, helping classmates gain greater mastery. Ideally, peer-to-peer learning involves groups in which each individual can be an “MKO” in regard to some aspect of the concept or skill, with each contributing in some way to the learning of their peers.

One offshoot of the importance of peers in development is the significance of play in the classroom, including (but not limited to) educational games.

Vygotsky suggested that play is an inherently beneficial activity, independent of any specific concepts learned in the process. The incorporation of games–even those done purely for entertainment and social interaction–has roots in Vygotsky.

Lastly, the centrality of language learning in the classroom across all subjects–not just those typically associated with verbal skill–is a legacy of Vygotsky.

Classroom techniques that ask students to describe or explain their thinking as a means of not only assessing understanding but also in building cognitive skills that will be important in future learning are Vygotskian in their assumptions.