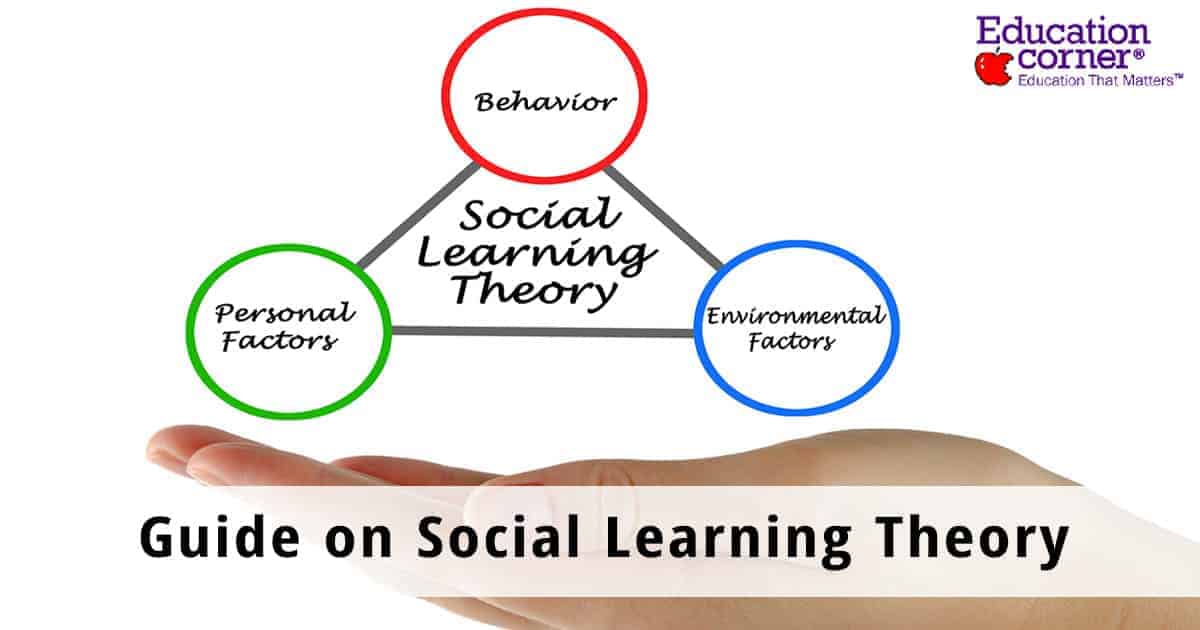 The way in which humans learn is something that has fascinated educators and psychologists alike for centuries, with the first scientific studies of learning taking place in the late 1800’s.

Since then, we have seen a surge of interest in learning concepts and theories, with various psychologists conducting studies to help them understand the way in which children receive, process and retain knowledge and skills during learning.

What is Social Learning Theory?

Social learning theory is the idea that humans learn from observing and imitating the behavior modelled by others. Bandura labelled this phenomenon observational learning. In short, it is not necessary to have a direct experience of something in order to learn.

For observational learning to occur, there does not necessarily need to be a live observation (i.e. a real person modelling or demonstrating the behavior). It can also take place by observing characters, real or fictional, in movies, television programmes, video games etc.

Observational learning can also occur through verbal instruction or listening to someone describe or explain how something is done.

What do we need to know about Social Learning Theory?

Let’s delve into each of these in more detail to gain a better understanding of social learning theory.

Bandura believed that all behaviors are learned through social imitation as opposed to genetics. In the early 1960s, he began conducting a series of now-famous studies known as the Bobo doll experiments which led to the development of his theory which he published in 1977.

As part of these experiments, a group of children were individually exposed to an adult model who was physically and verbally aggressive towards a Bobo doll.

When these children were left to play with the Bobo doll independently, many of them imitated and reproduced the behavior that they had observed.

This experiment was replicated at a later date but this time the adult model was either rewarded or reprimanded for the abusive behavior.

The results of these experiments showed that children can be influenced and can learn from observing the behavior of others.

What Other Theories are Linked to Social Learning Theory?

Bandura’s social learning theory is often linked to behavioral learning theories which focus on the idea that all human behaviors are acquired through conditioning and interaction with the external environment.

Behaviorists believe that all humans can be trained to perform any task with the right environment and conditioning, regardless of their background or ability.

However, he believes that direct reinforcement cannot account for all types of learning as both children and adults often learn things without ever having had direct experience with it and without demonstrating their new behaviors.

For example, a child who has never been on a bicycle before will know that you need to sit on the saddle and push the pedals with your feet in order for the bicycle to move.

This child would have learned this behavior by observing a model.

This model may have been another child or adult in their environment but could also have been a cartoon character on TV.

This led Bandura to add his own two ideas when formulating his theory:

Accepting that not all behaviors that are observed will be imitated, Bandura identified four factors (or elements) required for observational learning to be successful.

What are the 4 Elements of Social Learning Theory?

Attention: In order for a behavior to be observed and subsequently imitated, the observer must first notice the behavior and focus their attention on it.

If the behavior does not hold the interest of the observer or they become distracted, it is unlikely that the behavior will be retained reproduced at a later stage.

Retention: The observer must be able to remember the behavior they have observed and store it in their memory to be accessed at a later stage.

Even if the behavior is imitated shortly after it is observed, this still requires significant memory skills. A student’s ability to retain can be impacted by a number of factors.

Reproduction: This involves replicating the behavior that was observed. The ability of the observer to reproduce the behavior will depend on whether or not they retained the behavior following observation.

Of course, retention is not the only factor here. A person’s physical capability may also limit their ability to reproduce the behavior.

Motivation: In order for a behavior to be replicated, the observer must be motivated to reproduce it.

This motivation can be intrinsic or extrinsic. Reinforcement and punishment are key factors in motivation, with learners more likely to imitate an observed behavior if it results in a positive outcome.

Motivation can also arise from observing others being rewarded for the same behavior.

A person’s self-efficacy or belief in their own capability to reproduce the behavior can also have a significant impact on motivation.

How can Social Learning Theory be Applied in the Classroom?

As teachers, we want our students to be successful and to learn to the best of their ability. The way we teach and the strategies we employ, as well as our classroom environment, all have an impact on teaching and learning.

Let’s look at a few ways in which we can utilise Bandura’s social learning theory in our classroom.

Good classroom management is key to successful teaching and learning. Without it, chaos can ensue and this will hinder both the teacher and the students.

Social learning theory can be used to encourage and teach desirable behaviors in the classroom through the use of positive reinforcement and rewards.

For example, a student who is praised for raising their hand to speak will more than likely repeat that behavior. Additionally, other students will follow suit and raise their hands after observing that the behavior elicited a positive outcome.

Conversely, a student who is reprimanded for an undesired behavior is less likely to repeat that behavior, as are their peers who will also wish to avoid the negative consequence of replicating the action.

As previously stated, one the prerequisites for observational learning to be successful is that the observer’s attention is focused on the behavior.

Therefore, before demonstrating or modelling something to our students, it is paramount that we have their full attention. Ensuring that lessons are level appropriate and as engaging as possible will help sustain students’ attention.

Retention of the behavior or information modelled is also key to successful learning. As we know, individual students learn in a variety of ways.

One of the ways we can help our students to retain information and behaviors is to incorporate as many different activities into our lesson as possible. A multisensory approach to learning helps to increase retention.

For example, while teaching a lesson verbally, we can use visual aids to help reinforce the information.

As Bandura identified, in order for observational learning to be successful, the observer must be motivated to reproduce the behavior.

Studies show that teachers who are enthusiastic and passionate when teaching can motivate students to learn as they are likely to imitate their teacher.

Bandura’s self-efficacy theory is rooted in the social learning theory. If a student has confidence and believes that they have the ability to reproduce a certain behavior then they are more likely to try and to succeed.

Conversely, if a student lacks confidence and does not believe that they have the ability to carry out a task, then they are less likely to exert effort into the task and may ultimately end up failing.

As educators, it is our job to find different ways of motivating our students to learn.

In our classroom, learning does not solely take place through students observing their teacher.

Learning also takes place through observing their peers which is why using pair work and group work in the classroom can have many benefits.

For example, pairing a higher ability student with a student that is struggling allows for peer coaching to occur.

This is a very useful and effective strategy used in classrooms today. Students are often more likely to pay attention to their peers than to another adult.

While social learning theory has been praised for offering us a different perspective on how learning occurs, it is not without its flaws and has attracted criticism from those that feel it has its limitations.

Many theorists feel that it offers too narrow a view, disregarding important environmental influences and factors such as socio-economic status.

Social learning theory suggests that a person’s actions and behavior are determined by society and fails to take into consideration individual accountability.

It also fails to take into account the influence of biological factors such as genetics, with biological theorists arguing that some behaviors are in fact partly inherited.

Social learning theory certainly has its place in our education system and offers us a greater understanding of the way our students learn.

However, it is also important for teachers to be aware that if strategies are not implemented correctly or are used inconsistently, they are unlikely to be effective.

It should also be noted that what works for some students may not work for others regardless of how much positive reinforcement or punishment is given. There is no doubt that there are many external factors that impact a student’s desire and ability to learn.

One thing that social learning theory does show us is that observation plays an important role in shaping the knowledge, behavior and attitudes of our students.

For this reason, teachers need to be excellent role models and ensure they are being inclusive, inspiring and compassionate towards their students.

What Is Social Learning Theory?

Bandura’s Social learning theory revolves around the idea that humans learn from observing and imitating the behavior modelled by others. Bandura labelled this phenomenon observational learning. In short, it is not necessary to have a direct experience of something in order to learn.

What Are the 4 Elements of Social Learning Theory?

Attention: A lesson must engage a student sufficiently to hold their attention.
Retention: Students must be able to remember what they have seen or heard.
Reproduction: Students should be given time to practice the observed behavior
Motivation: A student must be able to see the benefit of a new behavior for long term assimilation.