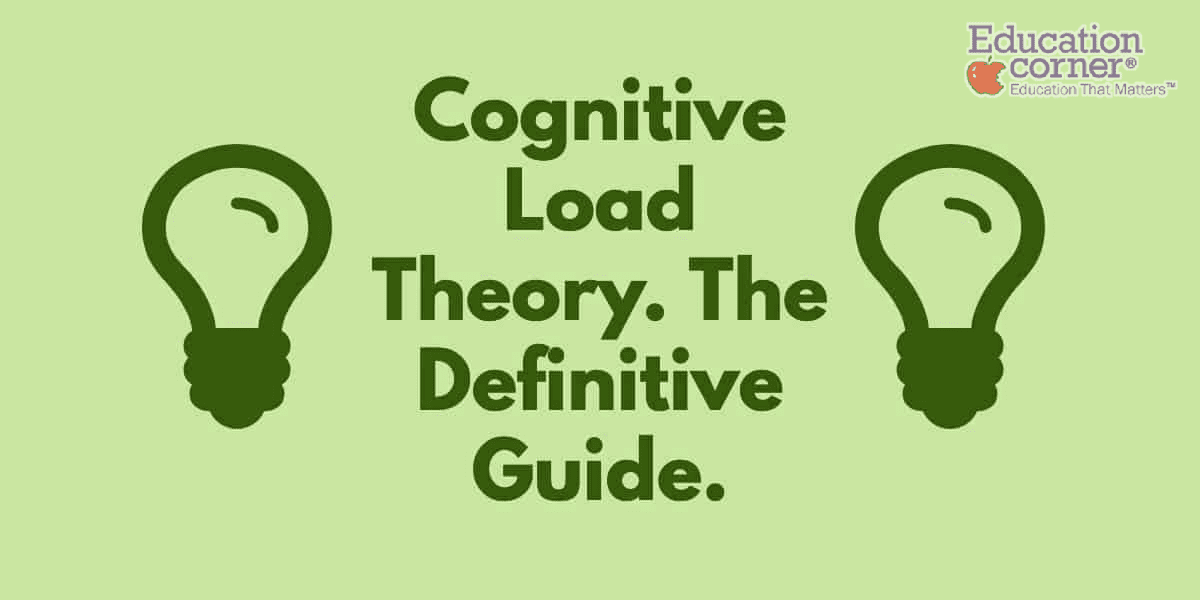 What is Cognitive Load Theory? Cognitive Load Theory explains that working (or short-term) memory has a limited capacity and that overloading it reduces the effectiveness of teaching. There are 3 types of cognitive load; Intrinsic (how complex the task is), Extraneous (distractions that increase load, and Germane (linking new information with the already stored in the long term memory).

If only we knew how students mentally process new information?

Why it isn’t the first thing taught to new teachers bewilders me!

Wanna know all about it?

I thought so, let’s dive in.

What is Cognitive Load Theory?

Cognitive load theory builds on the premise that working (or short-term) memory has a limited capacity and that overloading it reduces the effectiveness of teaching. Much in the same way that having too many windows open on your computer, reduces its capability to work properly.

What is Working Memory?

The working memory is responsible for rapid perceptual and linguistic processing. Put simply, it works out what the new information is all about and whether to store it in long term memory or discard it.

When a student (or anyone for that matter) is subjected to new information, their brain gives it a classification and stores it in the long term memory, this classification is known as schemas.

The more you use these schemas (practice) the easier the retrieval of the knowledge. Schemas are a very big part of cognitive load theory.

What is Cognitive Load?

What are the 3 Types of Cognitive Load?

The three types of cognitive load build upon each other, too much of each of the first two (Intrinsic and Extraneoous) may not leave enough working memory to deal with the third (Germane).

Intrinsic cognitive load refers to the innate difficulty of the task. For example, recalling that Clownfish live in anemones would be low intrinsic load, whereas, explaining why both species benefit from this would be a higher level of intrinsic load.

Teachers can match the intrinsic load of a topic to the experience of the learner but can’t do much to reduce the complexity of the topic.

We can, however, reduce extraneous load.

Extraneous cognitive load is where we as teachers have the most control.

Extraneous cognitive load is concerned with the material and environment we subject the students to.

Poorly constructed materials and busy classroom environments can lead to the split-attention effect and add to extraneous cognitive load, it is our job to reduce this with the way we present our lessons.

Simply stated the split-attention effect is the distraction generated by using too many conflicting principles. It is detrimental to cognitive load.

Reducing the materials down to only contain the elements that are required is crucial.

Irrelevant images, distracting sounds or animations or even fonts that are difficult to read, a monotone voice and complicated vocabulary all add to the extraneous load.

If you don’t manage the first two correctly, the next one can’t happen…

…and that’s a BIG problem!

I bet you’re wondering how you can reduce extraneous load right?

Don’t worry we’ll get to that in a bit.

Germane load is what we actually want to happen, it is the capacity of the working memory to link new ideas with information in the long term memory (It’s the moment we’ve all seen, the “a-ha” lightbulb when a student finally gets it!).

The more prior knowledge a student has, the more effective the germane loading stage. Germane load is where metacognitive strategies come into play, it is where students are aware of their thinking processes and able to adapt new information accordingly.

Teaching students the prerequisite skills prior to having them undertake a more complicated task will help them construct new schemas that strengthen their working memory.

This means that pre-training, or teaching people prerequisite skills before introducing a more complex topic, will help them establish schemas that extend their working memory; and this then means that they can understand and learn more difficult information.

If we overload a student’s working memory with intrinsic load (making the task too difficult to comprehend or carry out) or extraneous load (giving too many distracting stimuli), we don’t leave enough to achieve the goal, the successful germane load.

This results in frustration (in both the student and the teacher) and a reduction in engagement in future tasks. How many times have you heard “I just don’t get it, it won’t stay in my head”?

Maybe analysing the intrinsic and extraneous load you are putting the students under needs a rethink.

What are the 5 Principles of Reducing Cognitive Load?

I told you earlier when talking about extraneous load that I’d show you the best ways of reducing it. Well, as promised, here we go. (I’d never let you down!)

In his 2002 paper, Richard E. Mayer described five principles that teachers can use to help reduce cognitive load and thus, increase retention and progress by our students.

As an exercise, take a look through a few of your lessons and ask yourself, “Do my lesson designs to follow these principles?”.

Quite simply, the coherence principle involves reducing the amount of information on each slide/page/worksheet to only that that is necessary.

Images, sounds and words that are not essential, add to cognitive load.

Giving the student’s working memory fewer stimuli to focus on enables more processing power to be used by the germane load (remember this is our goal).

The signalling principle tells us to help our students focus on the information we are talking about by highlighting the important details.

We can do this via arrows or rings around the information. This reduces cognitive load by taking the work of scanning this visual away from the working memory.

This results in more juice for the germane load!

Students learn best from images and narration, rather than text and narration. Images (visual) and narration (audio) do not compete with each other, therefore they use less cognitive load.

This is known as the “Modality Effect”.

Basically, don’t put lots of text on your resources and definitely don’t just read out the text word for word (you might as well tell your students to go to sleep, they’re going to be doing that anyway!).

Dual coding theory suggests that images, a small amount of text and narration (visual and verbal stimuli) are the most efficient way of reducing extraneous load. Just look at the two examples below that I have taken from Oliver Caviglioli’s brilliant book “Dual Coding with Teachers“

Placing labels next to the thing they are describing, so students don’t have to waste cognitive load juice working anything out.

It’s all about making the working memory’s job easier in terms of intrinsic and extraneous load so students have more use of germane load, the ability to make those connections with previously learned information.

Last but not least is temporal contiguity. This one is achieved simply by presenting the visual images and their labels at the same time. By doing this, the working memory knows they should be treated as an individual unit rather than separate entities.

Now you see why I’m convinced Cognitive Load Theory should be taught to all trainee teachers. It literally teaches us how to teach!

Along with Rosenshine’s Principles of Instruction, Metacognition and Dual Coding Theory, Cognitive Load Theory, in my opinion, should be the basis of all teacher training.

What do you think? Comment below with your thoughts.

But first, there’s a bonus poster at the bottom of this post from Oliver Caviglioli.

What Is Cognitive Load Theory?

Cognitive load theory builds on the premise that working (or short-term) memory has a limited capacity and that overloading it reduces the effectiveness of teaching. Much in the same way that having too many windows open on your computer, reduces its capability to work properly. For more information, read Cognitive Load Theory. The Definitive Guide.

What Are the 3 Types of Cognitive Load?

Intrinsic: The complexity of the task at hand.
Extraneous: This is concerned with the material and environment we subject the students to. Excessive distractions lead to an increase in extraneous load.
Germane: The capacity of the working memory to link new ideas with information in the long term memory (It’s the moment we’ve all seen, the “a-ha” lightbulb when a student finally gets it!).

What Are the 5 Principles of Reducing Cognitive Load?