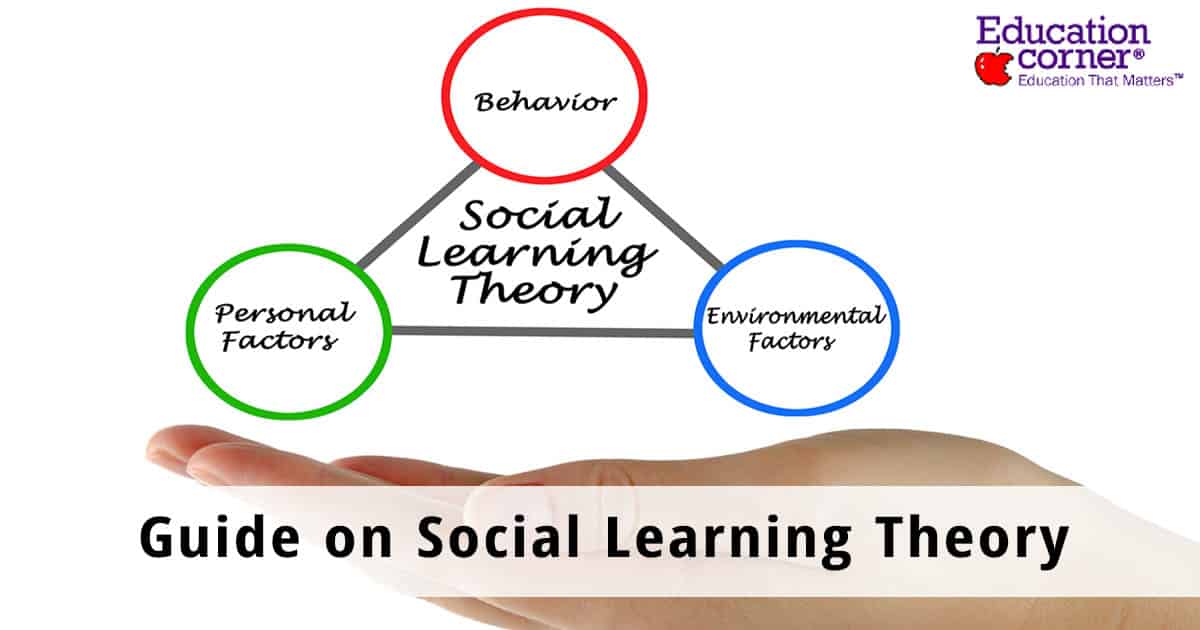 The Roots of Social Learning Theory

Social learning theory is part of an evolution in how researchers have come to understand the human learning process. Beginning in the 1940s, researchers began to suggest that learning occurred because of operant conditioning. Essentially, these researchers were suggesting that people learned based on whether their actions were rewarded or punished.

These initial theories about human behavior focused on behavioral views of the world. From a behaviorist perspective, most behavior was formed through conditioning, in the same way that rewards and punishments could positively and negatively reinforce a behavior. Eventually, though, researchers began to expand how they viewed behavior and began to suggest that interactions between the individual and their environment also played a role in learning. Specifically, researchers began to believe that the social environment a person was raised in increased the likeliness that they would take certain actions. In the same way, that same environment would increase the likeliness of those actions being reinforced. So, researchers did not abandon the idea of reinforcement completely. Instead, they began to propose new ways in how behaviors originated and the context in which they were reinforced.

At this same time, researchers also began to indicate that certain behaviors couldn’t be explained as a response to a stimulus. Some behaviors, researchers suggested, were behaviors that humans were specifically designed to take. There was a natural element to humans that drove them toward certain actions and cognitive mechanics that helped shape behavior.

The Principle of Social Learning Theory

Social learning theory was formulated to help better integrate new ideas about learning that included human cognition, the social environment, modeling, and reinforcement. Bandura helped formulate his first idea about the theory in 1963 and continued to refine the theory in the coming years. Five major principles regarding the theory emerged.

The first principle that served as the basis was that learning was not just a behavioral process that responded to stimuli. Instead, behavior was a cognitive process that happened within the larger social environment. People think about their behaviors, consider their environment, and make decisions regarding what they want to do.

A second principle underlying social learning theory was that learning and behaviors could be reinforced in one of two ways. Just as older researchers implied, learning could be reinforced based on the consequences of those actions. Punishments and rewards could increase or decrease the likeliness that a behavior would be repeated, which was called direct reinforcement. However, social learning theory implied that learners could also see the consequences of a behavior in others. Instead of directly experiencing the consequence, the learner could learn by observing the outcome of an action that others took. This was called vicarious reinforcement.

The third principle underlying the theory was the importance of observation, which was highly linked to the second principle. When observing, learners do observe the outcomes of an action, including whether it is rewarded or punished. However, they also identify other strands of information. Learners also observe the process that goes into the action so that they can repeat it themselves.

The final principle underlying the theory is that learners are active in their own learning process. Instead of being passive recipients of information, learners are engaged in their own learning process. They think about their behaviors, engage in their environment, and reciprocate with the influence that impacts them. Rather than be passive vessels to which information is transferred and behavior taught, individuals are active learners who negotiate their environment.

The Importance of Observation, Modeling, and Cognition

Social learning theory indicates that observation, modeling, and cognition all interact to inform learning. As such, all three should be considered when trying to understand how learning occurs. Human beings do more than simply respond to their environment, so behavior cannot be only a process of responding to stimuli. Instead, learning occurs by observation. People learn by observing the outcomes of an action as well as the details of successfully completing a task.

Having observed someone else, people then create models in their minds of the behavior, the process that informs the behavior, and the likely outcome. People judge the outcome and learn about whether they want to take the action based on whether the outcome is positive or negative. As such, the mental model that people create about an action and its consequences works similarly to the way that actually, physically taking the action works. However, remembering that individuals are active learners, people impact their environment in the same way that the environment impacts people. As an example, if a certain environment encourages violent tendencies in a person, that person may in turn impact their peers and encourage violent tendencies in them. There becomes a reciprocal environment in which the environment impacts the person, the person influences the environment, and that environment impacts the person even further.

There are different types of models that a person can use in order to model an action and its outcomes. The most traditional and commonly used models are live models. In this model, an action is taken and modeled for a learner. A person may demonstrate how to change a lightbulb for another person, for example, including turning off the light, unscrewing the bulb, and screwing on the new bulb before turning on the light again.

Finally, the third type of modeling that occurs is symbolic modeling. Symbolic modeling refers to the models that people observe in various kinds of media. Television, movies, the internet, the radio, and books can all describe completing an action. Because this involves modeling a behavior in a way that doesn’t involve direct interaction with another person, the model is symbolic. However, symbolic modeling still imitates either live or verbal modeling in its delivery.

The Four Aspects of Learning

In order to learn there are a series of processes that should occur as the learner sees a model and creates representations in their mind. The first process is simple enough. People must pay attention to the behavior being modeled. The chance that a person will learn increases when they pay a higher degree of attention to the behavior that is being modeled. Attention is impacted by the degree to which a person can perceive the details of an action, think on that action, and judge the success of that action based on past performance. As such, attention requires a high degree of engagement on the part of the learner. The event itself may cause people to pay greater attention to an action based on a number of factors. How novel the behavior is or how relevant it is to them, for example, may impact whether a person pays greater attention or not.

Retention is the second part of learning. Even when observing a behavior, people have to retain the details of the action and what they’re learning. Increasingly complex events might negatively impact the ability for a person to retain the details of the behavior. The person’s own personal characteristics may also negatively or positively impact a person’s ability to retain information, since some people may have learning techniques that help them retain information or inherent cognitive capabilities that increase their ability to retain details.

Reproduction is an important part of learning in the social learning theory approach. Instructors may demonstrate a model for learners, but learning requires reproducing what’s been modeled. The learner has to complete the task themselves. Depending on the task, it may be easier or harder to reproduce it. For instance, the details of certain behaviors may be harder to observe and reproduce. Certain actions in sports, for example, may occur because it is hard to observe all the nuance of what an instructor is trying to teach.

Finally, a personal characteristic that may impact learning is the learner’s own motivation. Different learners are motivated to different degrees to learn a behavior. People decide to reproduce something they learned based on a combination of the outcome they expect and their own internal motivation. Learners who are more highly motivated are more likely to reproduce a behavior and improve their ability to replicate the task in the future.

Social Learning Theory in the Classroom

One of the big takeaways from social learning theory is the importance of maintaining engaged students and modeling behavior for those students. So, over the past few years, teachers have changed how they design their classrooms to create environments where this is possible. The flipped classroom is one example of this. In the flipped classroom, educators assign learning materials outside of the classroom. In the classroom, a greater emphasis is placed on replicating what’s been learned. Teachers can model what students have studied, but the bulk of classroom time is committed to allowing learners to replicate what’s been learned. This allows students to both become more highly engaged and allows for extensive time to replicate the task.

Another example of how education has changed includes the increase in peer learning. In a peer learning classroom, teachers place an emphasis on allowing peers to teach other peers. This allows for increased engagement as students work with one another. The more experienced student can act as an instructor, modeling the behavior for the learning student. Students also feel more highly motivated when learning from other students, making peer learning an excellent example of implementing social learning theory.

Social learning theory represented a significant change in how learning was conceptualized. It indicated that learners were active in the learning process and that learning a behavior required more than just responding to something occurring in the environment. Instead, learning required that people observe their environment, become motivated to replicate a behavior from their social context, and learn not only from their own action but from replicating behaviors modeled for them. This approach to learning helped change approaches to teaching because it placed a greater emphasis on creating an active classroom in which students were increasingly hands on with their materials and learned from models demonstrated for them.