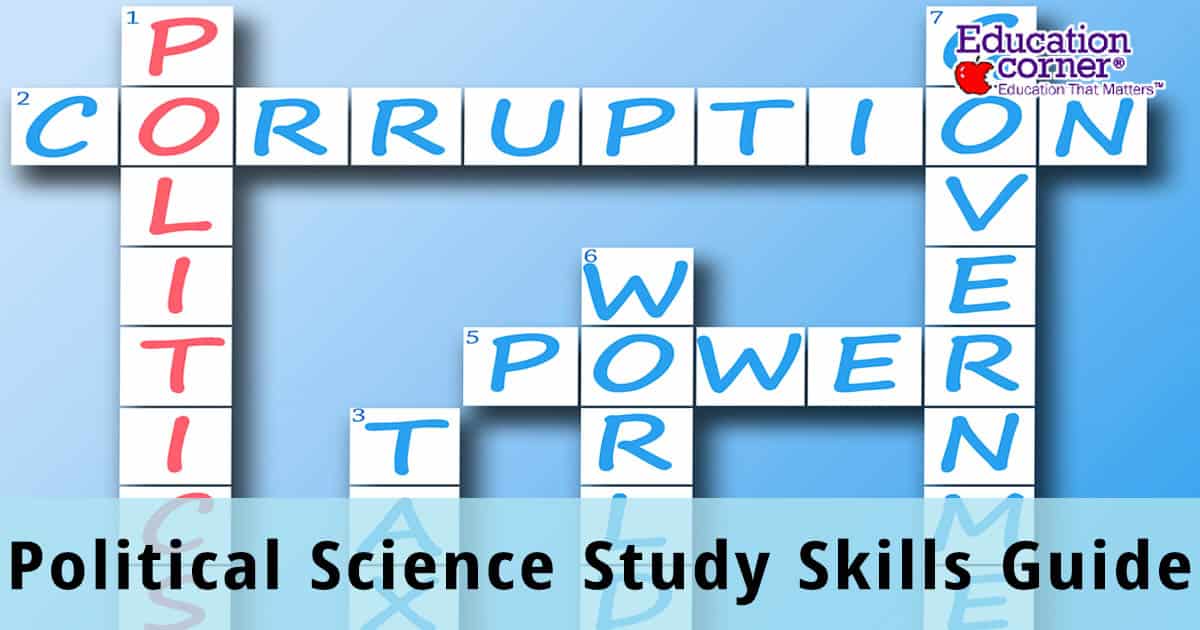 How To Study Political Science

What is Political Science?

It’s a lot to cover, and so political science can seem complex. That’s understandable, since the government is complex. It involves a lot of moving parts at many levels that impact the lives of millions of people. Political science attempts to bring this all together into a single field of study. However, this field of study is important because it helps answer many questions. Why does a government declare war? Why is there financial disparity between different groups of people? These are only a few of the questions that political science tries to answer.

One of the keys to performing well is being alert and ready for class every day. For this reason, it’s important to start preparing for your classes early. That means getting ready the day before your classes are supposed to happen. Getting your clothes laid out and making sure you have all the materials you need for the day are important parts of preparing for classes.

Those may seem like small things, but they really do play an important role on the day of your classes. Without having to worry about your clothes or everything you need for your class, you’ll have more time every morning to clean up and have breakfast. That means less rushing to school and a better chance that you’ll arrive on time. Without all the anxiety of having to rush to your classes, you’ll be better prepared to be attentive during your courses.

Listening and note taking should go hand in hand. Listening does not mean hearing. Hearing just means that you’re processing what your instructor is saying but not really comprehending it. Active listening means engaging with the material, asking questions about it in your head, and staying focused. Make as much eye contact as possible, identify important points in the lecture, and think up questions you have about what your teacher is talking about.

Of course, you can jot down those questions and important points in your notes. Good notes are brief and highlight only the core points that your instructor is trying to communicate. You should be able to, at a glance, summarize what your teacher was trying to say. Don’t go into overly long, wordy notes or you’ll lose the point. You also might miss follow up information your teacher is trying to provide. The questions that you write about the material are important because they mark areas you might be confused about. You can follow up on those points in your study materials or with your teacher.

Sovereignty refers to the concept that people get to rule themselves. There is a certain amount of power invested in a nation or country by which life within its borders is organized. Government exerts public power and enforces laws that allow order to be maintained in society. Sovereignty also refers to the power of countries to rule themselves, asserting authority within their territories.

Within a sovereign state, there are few limitations to an authority’s power, that authority is permanent so long as the country exists, and the authority exerted is wide in scope. These powers cannot be given away and are not under the control of foreign actors. For instance, the United States government is divided into three branches, but these branches govern the people within its borders from the local to the national level and influence everything from religion to federal taxes. This power has existed and been modified since the country’s founding and is exerted by the representatives of the people, not by foreign countries.

Over time, sovereignty has also come to refer to different forms of power.

The concept of development refers to the process of growth in a country. Strategies are put together that are designed to improve the nation’s outlook. The tactics that country’s establish can include planning highways, water systems, the development of urban centers, improved agricultural processes, and higher quality amenities for people. Other examples of development can include planning for improved healthcare or communications access. In short, the concept of development has to do with the growth of a country. When researchers try to judge a country’s development, they look at mortality rates, employment rates, income levels, and other factors that indicate how much a country has improved the lives of its people.

Underdevelopment is a related concept to development. The difference with underdevelopment is that it refers to a state when countries are lagging in their ability to improve the lives of its people. A country may have poor highways and transportation systems, for example. This would make it difficult for companies to operate in the country or even for people to just get around. Other signs of underdevelopment include low income levels, low literacy levels, or high mortality rates, among other factors.

Law and policy refer to the laws that govern a country and the policies by which a government operates. Law is often associated with the rule of law, meaning that everyone is accountable and will pay penalties for breaking the law. People can only be punished by an authority when there is actually a breach of the law. These basic principles establish that punishment can only occur within a certain context. Punishing people on a whim and without justification should not occur, at least if a country is operating according to democratic principles.

Policy and law are often associated, but policy is more closely associated with guidelines that an authority agrees to follow when making decisions. It may be the policy of a country to preserve public lands, for example. When this is the case, it may pass laws that set apart lands for the public rather than selling those lands for private use by companies. Policies establish the goal an authority is hoping to meet and the principles it will adhere to when establishing laws.

Rights refer to the what citizens are entitled. This concept establishes that there are fundamental rights people are owed that no law should break. For instance, in the United States Constitution, people are attributed fundamental rights in the Constitution. The Bill of Rights lists the right to free speech and the right to bear arms, as only two examples. These rights are important because they dictate what always may be passed and what may not. Laws can’t be passed that break a person’s right to free speech, for example. It’s important for a nation to establish what rights it considers fundamental, because this impacts the way the rest of its laws are established.

School is generally broken down into homework, quizzes, and tests, in progressing difficulty. Mastering the most basic material, homework, is the first step to acing tests. So, from day one, you want to be preparing for your tests by committing your time and energy to doing well on your homework.

Effective notes taken in class will make it all that much easier for you to more easily complete your homework, which is why it’s so important to be an effective note taker. Homework also helps you to more easily judge how far along your own progress is. IF you find you’re not doing as well as you’d hoped, it’s a good sign that you should consult with your teacher and get outside help.

However, once you’ve started mastering your homework, you’ll be setting yourself up for success on your quizzes. Effective teachers use quizzes as a way of periodically judging the progress of their students, but quizzes are one more way for you to assess yourself. Keep track of all your scores on your quizzes and keep your old quizzes. When it comes time for your tests, review your quizzes and find where you went wrong. Good test scores come more easily when you’re performing well on quizzes, since quizzes are just smaller assessments. By reviewing your quizzes and homework before your tests, you’ll be in an excellent position to pass your exams.

Too many students don’t bother seeking outside help when they’re struggling in class. Very often, students are afraid to ask for help, or they just hope that they’ll do better on future assessments. Unfortunately, this often means that they just fall further behind. Instead of letting yourself fall behind in your studies, don’t be afraid to seek outside help.

The first step to getting help comes from interacting with your instructor. If they have the time, instructors are typically more than happy to review lessons with you and the materials you’ve previously studied. If the teacher has an assistant, sometimes they can help tutor you. However, it’s also possible to find help from other sources.

For instance, today there are many online sources that you can consult for help. Online resources can provide some quick help for a wide variety of topics in political science. However, since each class is different, each teacher approaches their lessons in different ways. Your instructor may cover topics in specific ways or want you to have knowledge about specific issues.

That’s why one of the best ways to stay on top of your lessons is by connecting with other students in your classroom. Your fellow students are some of your best resources. IF you are forced to miss a class, you can always rely on your study partners to fill you in. Your classmates also make for an excellent study group. By exchanging notes, you can help each other fill in what some of you may have missed. Your test notes can be more comprehensive than the notes you wrote on your own. For all these reasons, it’s smart to get to know your fellow students at the start of the year.

College students majoring in political science may particularly benefit. Since you’ll be taking a series of college courses in political science, you’ll be able to keep your study partners through the years. This will help you create an even more effective study group as you continue to work with one another over time.

You might also be interested to take a look at our Study Skills resource hub for more study guides. Below you'll find more editor and user recommended study skills resources, guides and learning tutorials that will help you learn Political Science and improve your study skills.