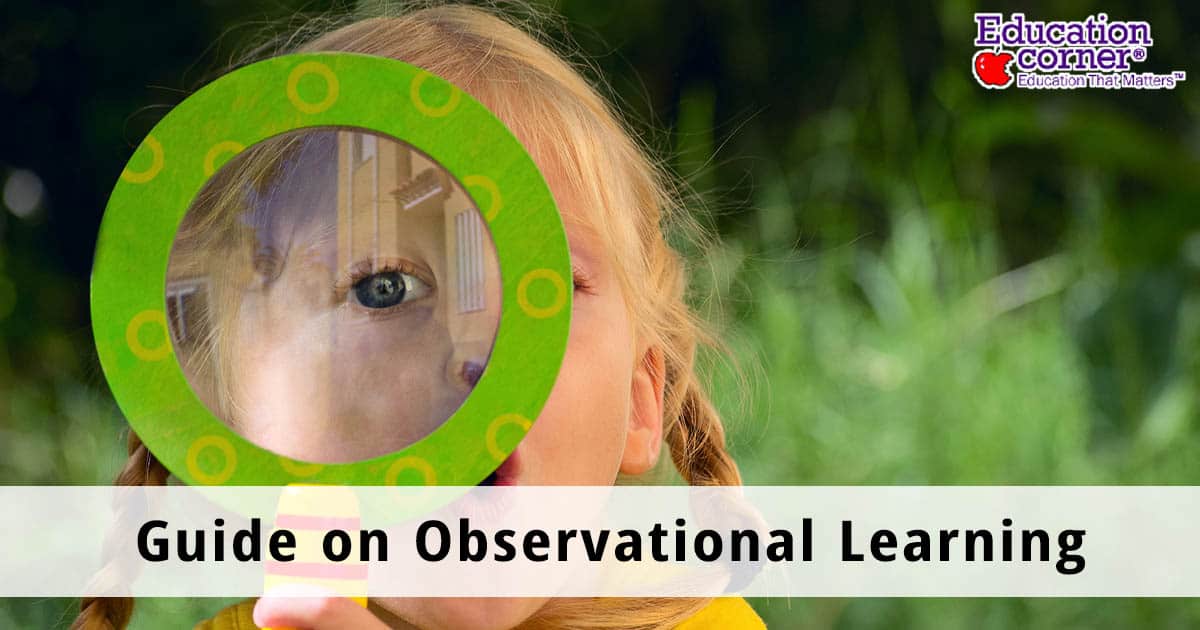 It’s not uncommon for people to conceptualize learning as an action that occurs through the use of books and lectures. This is referred to as the traditional model of learning, in which students are expected to go through rote memorization of specific information. This has long been the model adopted in the United States, though that has changed over the last few decades as more educational reforms have taken place. One of the changes has been greater attention to observational learning, a type of social learning that does not necessarily require any type of reinforcement.

Observational learning, like its namesake implies, is a type of learning that happens as students observe a model. The learner learns by observing the behaviors of others. This social model could be any one of a number of people, including family members, teachers, or friends. The social model tends to be a particularly powerful instructor when they occupy a higher status, such as teacher or parent, and this effect is particularly powerful among younger people. As such, children may particularly benefit from having strong social models who model behavior for them.

At the core of observational learning is the importance of the social model. Observational learning is so powerful that researchers realized that sometimes incidental behaviors that they demonstrated were picked up by learners and used in sometimes very different contexts. As such, learners may sometimes observe behavior and learn from it without the social model even intending to model behavior for anyone else. Then, learners can transfer what they’ve learned to a completely different environment. This has significant implications for anyone who occupies the role of a social model, since their behavior may significantly influence the behavior of a learner even when they have no intention to do so.

A social model may try to demonstrate a skill to a learner and show its successful outcome, which would encourage the learner to attempt the same behavior. At other times, a social model’s actions may be rewarded. Children, observing this, will attempt the same behavior once again even if the model was not purposely attempting to demonstrate the behavior. Or, children may avoid that behavior if the model was punished. With that said, children were generally less likely to change their action based on punishments. The implication of this was that children instead responded more strongly to rewards. For anyone in a social model role, this meant that to most strongly encourage changes in a child, rewards should be the focus of the model, rather than punishment.

For educators, observational learning has two be considered in two distinct ways: learning and performance. Learning refers to the cognitive model that a person forms, while performance refers to the actual ability to repeat the task. When testing whether modeling is working among students, instructors should assess their students first by asking them to verbally describe the task. The greater the ability for a student to describe the steps, the greater amount of learning that has occurred. Afterward, students should be actually asked to repeat the task themselves, which indicates their performance level. Although there are correlations between the ability to describe a task and repeat it, those correlations are not always perfect. There may at times be a gap between how well a student has learned a task versus how well they can perform the task.

Returning to the value of rewards versus punishments, researchers found that there was a gap between how well participants were able to repeat a task based on rewards versus punishments. In observations of children, researchers found that those who were rewarded and punished for learning a task could both describe how to do the task at about equal levels. In other words, both those who were rewarded and punished experienced a similar level of learning. However, in actual practice, there was superior performance among the reward group. These findings implied once again that rewarding learners was a superior approach to instructing students, though in this case specifically when it came to performance of the task. As such, teachers may find that students can similarly describe how to perform a task but may not be able to equally perform that task in practice. This may be related to the rewards and punishments system that the teacher has used.

The Stages of Observational Learning

Researchers indicated that there were four stages to observational learning. Early in the development of this learning model, Albert Bandura formulated these stages to create a theoretical system by which students progressed from initial observation to actual practice. At the earliest stage of learning, students first needed to pay attention. Teachers should take note the importance of attention to learning. This shouldn’t be a surprising statement, but the level of attention that a learner pays to an instructor impacts how much they learn. This is no different in observational learners. The learner must observe what’s happening and pay attention to the steps in a task. How much attention the learner pays, though, can depend on a few different factors. Researchers found that the degree to which an observer identified with the model impacted the degree of learning that occurred. This suggested that teachers should try to cultivate good relationships with their students that would help encourage increased observations during the learning process.

The second stage of the observational learning model included retention. This stage should be simple enough for students to understand. What is taught must be retained, and observers need to put what they’ve observed into their memory. How much an observer retains goes back to the fact that they needed to have paid attention, which itself relied on how much they identified with the model. However, other factors also impact retention. There are sometimes inherent characteristics that impacted how much a student retained. At other times, different learners had different retention strategies that helped them to more effectively retain what they had learned. Retention would rarely be equal between learners, given the diversity of the population, which may require models to model a behavior more than once for some learners. Remembering that there is a difference between learning versus performance, at this stage, the degree of learning could be tested for by asking students to repeat the steps of the task.

The third stage of the observational learning process was the initiation stage. At this stage, learners now have to demonstrate performance by repeating the task themselves. The observer must demonstrate they are capable of repeating what they’ve been taught. It’s expected at this stage that an observer possesses all the necessary skills to repeat the task, but this may not be the case. Some tasks may be complex enough to make reproduction difficult. This is particularly the case when it comes to physical skills. Learners may observe a model, but it may require practice to repeat the task physically even if they can verbally describe perfectly what’s happening. Physical repetition is particularly difficult with complex physical tasks that occur in areas such as sports or music. For many teachers, this may not be a struggle they have to concern themselves with. However, there may be nuances to repeating certain tasks, such as handling equipment in a lab experiment, that impact a student’s repetition of what they’ve observed. This is where repetition and practice helps to improve the student’s performance.

The final stage of observational learning is less of a stage and more of a description of one characteristic that is necessary for learning to occur. Namely, students need to be motivated to learn. Students that are highly motivated are more likely to want to recreate a behavior they observe. This impacts the degree of attention they pay, impacts their retention, and impacts their drive to physically reproduce the behavior. As such, teachers cannot dismiss the importance of this quality among students. To the extent that they are able to, teachers should do their best to encourage the motivation of their students in order to improve both learning and performance of a task.

It’s easy to see just how many situations in which observational learning may apply. Children pick up all sorts of behaviors from their parents, for example. They may observe their parents doing laundry, such as folding clothing, and demonstrate the ability to do the same. Children on a playground may observe other children being punished for playing roughly and avoid that behavior to avoid being punished themselves. Yet once more, children may observe other children playing a game and learn the rules for themselves by simply observing.

The concept of peer learning itself takes on special importance when considering that the degree to which a learner observes and retains information has a lot to do with the degree to which they identify with the instructor. Students may find it hard to identify with their teacher, but they may find it far easier to identify with their peers. For tasks that can be observed and modeled, it may be beneficial to pair students with other students. By doing so, teachers may increase the likeliness that learners will pay attention during the task and retain information. Students may also feel more motivated when observing their peers. For better or worse, social influence and pressure plays a role in the behavior of almost everyone. The influence of social peers may drive students to want to perform well on a task, motivating them to pay more attention while the behavior is being modeled. This would in turn lend itself to greater observation, retention, and a stronger desire to repeat the task for themselves.

One last note about observational learning is that it relates to another important learning theory, the concept of latent learning. In latent learning, people learn skills and the ability to do things without being expressly instructed. They don’t manifest those skills until they’re prompted to do so. For instance, a learner may observe someone regularly completing a task. Returning to the example of a child that watches their parents fold clothes, the child may then learn to fold clothes themselves yet never demonstrate the skill until prompted.

The important takeaway here is that learning occurs all the time, even when there is no intention to teach a person. By modeling behavior for children, skill can be encouraged indirectly. Parents who read at home will be observed by their children, and those children will then be motivated to read for themselves. That is an effect of observational learning, since it teaches children the habit of reading. However, if there are educational resources in the environment that they can read, then children will end up reading about different educational concepts and skills. They may then demonstrate those skills in the classroom, even if they were never expressly taught to them by anyone. As such, observational learning and latent learning may work together to encourage skills in students that manifest themselves once the student is in the classroom.