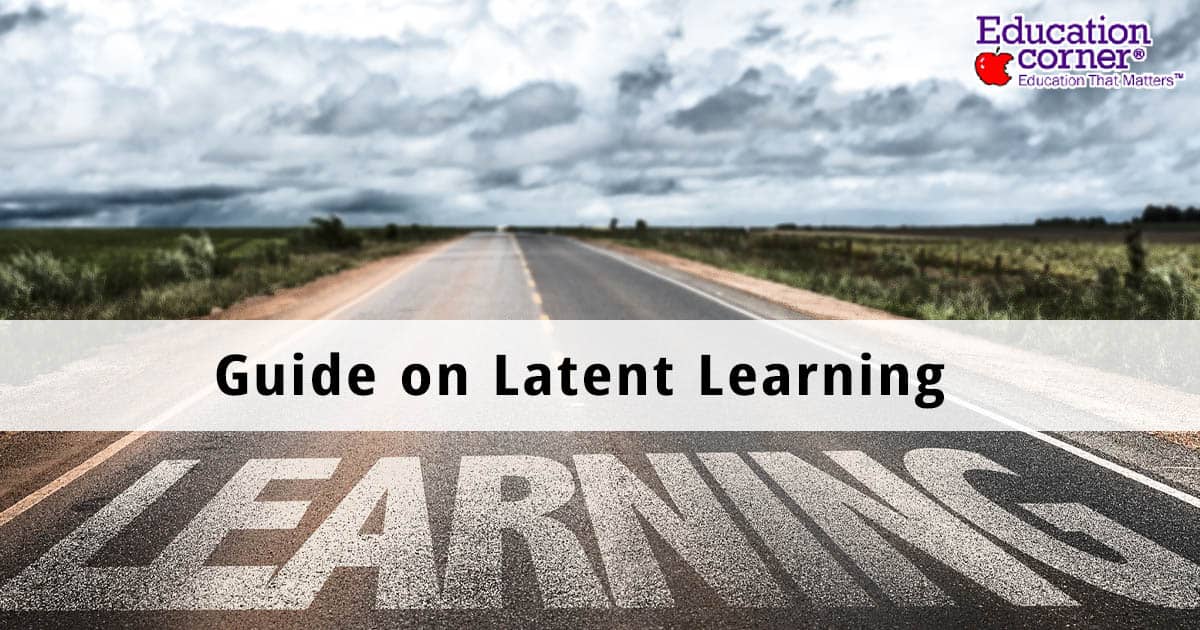 Over the years, there have been many models of learning that have been developed and many teaching interventions designed, in response, to take advantage of these models. In many cases, learning is discussed in the context of schools and purposeful attempts to instruct students. However, learning does not always occur in this manner. Instead, learning sometimes takes place in other ways. Researchers have proposed the concept of latent learning as a way of characterizing the subconscious retention of information even if there is no reinforcement of what’s being learned. Latent learning was also characterized by changes to behavior that only occurred after the subconscious retention had occurred and at a time when a person had the motivation to act on what was learned.

Classical conditioning is the core form of learning identified in the literature. It involves the use of pairing a potent stimulus with a neutral stimulus in order to produce a desired response. The classical example of classical conditioning can be found in the form of Pavlov’s dog. This is a classic experiment that describes how a dog can be trained to respond to stimulus even if that stimulus shouldn’t create the response.

In detail, Pavlov’s experiment occurred like this. Pavlov noted that the presence of food caused a dog to salivate. In contrast, the ringing of a bell did not cause the dog to salivate. However, by presenting the appearance of the food with the ringing of the bill, Pavlov caused the dog to associate the bell with food. Afterward, the dog would salivate whenever the bell was wrong even if there was no food present. Pavlov did this using other sounds as well, such as a metronome. The dog had learned to associate these sounds with food, causing it to salivate at the sounds instead of the food. The dog was having an anticipatory reaction.

Positive reinforcement occurs when a behavior is rewarded. This is simple enough to understand and involves rewarding behavior with something that a person enjoys. Negative reinforcement occurs when a behavior results in a disliked stimulus being removed. For instance, a person may be in a room where a song they hate is being played continuously. Removal of that song would cause a person to repeat the desired behavior in the future. Reinforcement always refers to encouraging a specific behavior.

With a better understanding of latent learning, it is now time to compare ho it functions versus other types of learning. Remember first that classical conditioning occurs when a neutral stimulus has been paired with a salient stimulus. This causes people to subconsciously associate the neutral and salient stimulus together, so that they anticipate the salient stimulus even when exposed to only the neutral stimulus. In contrast, latent learning relies on learning that only affects behavior after there is a motivation. The prime example includes mice who have run a maze enough times to learn its layout. In practice, they might not demonstrate the ability to navigate the maze when placed into it, even long after they should have learned it. They have no reason to navigate the maze. However, if food is placed into the maze, the mice quickly demonstrate an ability to navigate the maze and find their food.

In this specific example, the rate did not learn to associate two stimulus and did not learn to navigate the maze on the base of a stimulus. Instead, the mouse responded to the presentation of a stimulus and demonstrated knowledge of how to navigate the maze only after that stimulus was placed into the maze. This demonstrated latent learning, knowledge to perform a behavior that required a stimulus to motivate the behavior. This therefore demonstrated a type of learning that did not adhere to classical conditioning.

Once more, latent learning demonstrates it is distinct from other theories of learning when compared against operant conditioning. Under operant conditioning, animals or people are given rewards or punishments meant to increase or reduce a behavior. Returning again to the example of the maze, the mouse who learned how to navigate the maze did not attempt to do so because it had been rewarded, nor did it learn to navigate the maze because it was punished for not navigating it. Instead, it learned the knowledge to navigate the maze but only demonstrated the ability to do so after being presented with a stimulus. Punishments and rewards were not associated with this type of learning, and choices based on anticipated punishments or rewards did not occur. As such, latent learning again seemed to be distinct from other types of learning.

The implications of latent learning for educators is that not all learning is direct. Some learning happens without express instruction. Children may learn skills that they only later demonstrate when they become stimulated to. For instance, children sometimes demonstrate skills that they learn from their parents. They may at times pick up on how to drive to school, for instance. Having been taken to school every day by their parents, children may one day, when motivated, show that they can do the same themselves. Nobody expressly instructed them to do so, but they learned the skill anyway.

The implication for teachers is twofold. First, they cannot be expressly taught certain skills, so the classroom may not always be the center of learning teachers want it to be. However, the second implication of latent learning is that learning can be indirectly manifested. Because so much of learning is indirect, the home can also become a center of learning. Certain skills, if demonstrated in the house, may help to supplement the learning teachers are trying to encourage in the school. Parents can create an educational environment in the house with various educational resources, such as reading materials, and simply create an environment in which what children have access to is primarily educational material. Parents may read these materials themselves as a modeling behavior without expressly trying to instruct their children and find children themselves begin to read these same materials. For this reason, teacher-parent collaboration may be important.

The implication of latent learning is that parents can play a strong role in a student’s education, even if the role they play is indirect and simply meant to encourage skills that are only manifested later, once stimulated in the classroom. As such, teachers need to begin to develop collaborative relationships with parents.

One of the problems that parents face is that they don’t know how to enhance the learning of their children. However, with the support of teachers, they can become educators of a different sort. There are several ways that these relationships can be encouraged. The first connections that teachers can make is in the form of open houses, which can acquaint parents with the general learning goals that teachers are trying to achieve. It may be more effective, however, to bring parents into the classroom itself. Teachers can recruit parents as volunteers and have them work in the classroom for a few days to get a deeper understanding of what sort of resources teachers draw upon, how they use those resources, and how they encourage learning among students. However, remembering that latent learning is about learning that is indirect, parents should be guided to creating educational environments in the home that do not always necessitate direct instruction.

Educational Environment in the Home

There are a couple of considerations that parents should take into account when making the home more of a learning environment for students. The first consideration that parents should make is to take into account the age of their child. What resources a parent provides and the environment they crate will depend on the age of a child. Some younger children, for instance, can be provided an entire playroom that is education oriented. Older students, on the other hand, may be less accepting of such environments and integration of educational resources may need to be more natural.

The second part of creating a learning environment in the home is to take into account a child’s interests. Resources should be oriented around what a child enjoys. Remembering that latent learning is not directed, parents shouldn’t create environments meant only to expressly teach students. Instead, these need to be environments in which a child’s own interests drive them to look at the resources they’ve been provided. Children may gravitate toward specific resources and, by reading them, learn certain skills that they can use in the class without being expressly instructed. For instance, students may pick up certain critical thinking skills or learn science concepts from reading materials related to what they’re interested in. This is a positive way of instructing children since it draws on what they already enjoy and allows them to pick up on concepts and skills without direct guidance. Then, once in the classroom, they may begin manifesting these skills once prompted by a teacher.

Besides providing resources for children, parents also need to become strong role models for them as well. They can create an environment that prioritizes learning. Instead of necessarily reading aloud to children, parents should demonstrate that, even when they’re not teaching their students, that they enjoy learning themselves. They can choose to read books in their free time, for example. Having already placed resources into the environment that’s conducive to learning, this may then cause children to independently pick up the learning resources already around the home.

At younger ages, children can be encouraged with a play environment that is simultaneously learning oriented. At this age, parents can create a play space that is simultaneously learning oriented. Children have access to more educational toys than ever before. Books, physical toys, and doctors kits can all convey basic concepts to young learners. At older ages, entire video games have been designed around learning different educational concepts. Some adventure games allow players to travel around the world and learn about different countries along the way, passing along geography skills. Some games are designed to make mathematics and even advanced physics concepts more enjoyable. Learners don’t have to be directed to learn. Instead, the implication of latent learning is that some learning must occur independently and those kills only later triggered in a formal learning environment.

Teachers may be frustrated by the idea that some learning is outside of their control. Latent learning is a type of learning that cannot be purposely directed. Instead, it includes skills that need to be acquired independently and only later triggered in the learner. What this means is that rather than focus on directly teaching learners, teachers and parents have to work together to create larger learning environments, in the classroom and in the home, that allow learners to independently acquire various skills that can be used in a formal setting. What may be frustrating is that it may be difficult to gauge specifically what students are learning, since they have to direct themselves toward what interests them. However, by providing a variety of resources, it becomes likewise possible that students will acquire a variety of skills.