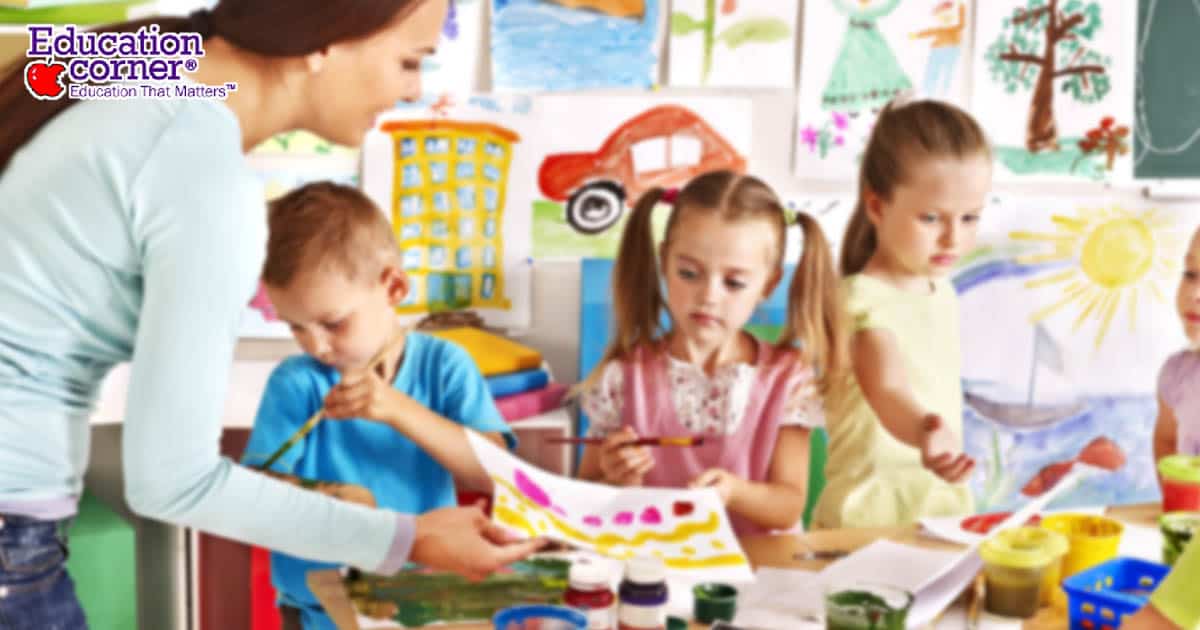 Efficacy of All Day Kindergarten

The first day of kindergarten is one of those indelible memories in life. Whether we were resisting letting go of our mother's hand or marching fearlessly into that building, proud to be a part of that world of our older siblings, each of us realized we were on the threshold of a whole new stage in life, one which for better or worse, there would be no turning back. Whether Baby Boomer, Gen x, or millennial, our time in that storied classroom began at about 8:30 and ended at noon. But ask a member of Generation Z, and while they may agree on the emotions that accompanied that momentous day, they'll most likely scoff at the length of your day. This is because, by the time they took that first step, kindergarten had, on most accounts, become an all day affair.

The idea for a full day of kindergarten took a while to catch on. According to an early childhood longitudinal study compiled by the United States Department of Education National Center for Education Statistics in 2004, 61% of American schools offered full day kindergarten classes during the 1998-91 school year and 56% of American children attended them. This was an increase from the early 1970s when the United Census Bureau found that less than 20% of children were enrolled in such programs, nor were many in existence. A later study undertaken by non-profit research group Child Trends found that the number had grown to 80% by 2017. Throughout this period and even to the present day, proponents and opponents of the full day program have made their views known.

The Debate over All Day Kindergarten

Proponents pointed out that a number of socioeconomic changes had taken place in society. The number of single parent households has increased as well as those in which both parents are working. Finding day care was both logistically and economically more feasible when kindergarten children were on the same schedule as those in other grades. The increase in working mothers also meant that children entering kindergarten had, in most cases, been in preschools or daycare for a full day, and so were ready for the social, physical, and cognitive demands of a full day kindergarten.

Likewise, many economically disadvantaged children were reaping the benefits of Head Start programs. From educators points of view, children being in class for a full school day would give teachers more time to get to know each of their students, giving them the ability to individualize lessons to meet differing developmental needs. The children, themselves would have more time to acquire the early skills taught in a kindergarten curriculum that was becoming more academically rigorous.

Many opponents, early childhood experts among them, voiced concerns over this age group's developmental readiness for a full day of academics. They didn't dispute the need for a high quality kindergarten program that provides academic readiness, but rather, pointed out that four and five year-olds need ample unstructured time to engage in free play. Their fear was that full time programs with their emphasis on academic enrichment would not provide such critical activities. The Alliance for Progress, a non-profit early childhood group fell into this camp, issuing a report titled Crisis in Kindergarten, focused on their concern about the disappearance of child-initiated activities.

Conservative spenders based their opposition on fiscal concerns. They pointed out that many school districts were already under pressure to trim their budgets. They questioned where schools would find the money to offer a full day program which in many cases would call for hiring more aides and paraprofessionals, finding or building additional classrooms, and purchasing additional textbooks, materials, and equipment. And while states were slowly providing funding, they were not in a rush to do so.

Despite all the debate, both private schools and public school districts in all 50 states have succeeded in offering full day programs to families who are interested. The word interest is emphasized because not only are states that require full day programs in the minority, it may surprise many to learn that only a small fraction even require districts to offer kindergarten. A 50 state comparison of kindergarten through third grade policies, undertaken by the Education Commission of the United States (ECS) in 2018, reported that only 17 states plus the District of Columbia require children to attend kindergarten at all; and of these, only 13 plus the District of Columbia require districts to offer full day kindergarten.

The 37 non-mandated states have found a way to offer all day kindergartens anyway. They piece together available federal funding, available state funds, and in the case of private and parochial schools, parent-paid tuition to cover the cost of approximately 540 additional hours of class yearly. And not only have these academically enriching curriculums succeeded in benefiting children of all socio-economic levels, the programs they provide have quieted most of the qualms of early opponents.

According to another study undertaken by the U.S. Department of Education under the auspices of the NCES, children in all day public school kindergartens showed greater academic achievement in reading and math at the end of the school year than their counterparts in half day public kindergartens. Their scores showed a 12.8% gain in reading between fall and spring assessments and a 10.3% gain in math. They were also more likely to demonstrate advanced reading skills by the end of the term.

Furthermore, a growing accumulation of research suggests that a young child's early access to a full day of education contributes to his or her enhanced ability to read and cognitively perform throughout life. One such study was the Milton View, undertaken for the Milton WI Board of Education as it was involved in deciding whether or not to initiate an all day kindergarten program. The study found that “Full-day kindergarteners exhibit more independent learning, classroom involvement, productivity in work with peers and reflectiveness than half-day kindergarteners.”

Especially telling, however were the studies it included of underserved populations around the country. They provided facts and figures that served to emphasize the ability of full day programs to give children from low-income and financially struggling families the opportunity to close the gap that exists between them and their more financially well off peers:

The Importance of Play

Still there are those who remain unconvinced about the effects of full day kindergartens and whether or not they meet the developmental needs of five year-olds. Comprising of early childhood educators, health care professionals and other advocates, they have concerns that free play is given short shrift in favor of lessons stressing literacy and math skills. Crisis in the Kindergarten: Why Children Need Play in School, commissioned by one such group, the Alliance for Childhood pleads their case, emphasizing the need for a day that leaves time for exploration, imagination, exploration, and exercise.

It points out that the kindergarten of today differs from that of as recently as two decades when a typical day included time set aside for art, music, stories, and practicing social skills, along with plenty of time and space for unstructured play, emphasize that in these kindergartens of yesterday, children were "learning to enjoy learning." It contrasts this with curriculums of today, alleging that in some of today's all day kindergartens children spend six times as much time in literacy and math instruction and taking or preparing for tests as they do in free play or choice time.

While recognizing that the restoration of child-initiated play will not in itself solve the problems of children from poor areas in which schools have been neglected, nor will it singlehandedly help them reach their full potential, the authors maintain their stand for rich experiences that help children become avid learners. Their practical prescription for teachers of all day kindergarten is to remember that child-initiated play, when combined with playful yet relaxed learning, will lead to a lifelong exploration of knowledge. Their ideal for a "healthy" kindergarten is one that provides a balance of teacher-guided "focused experiential learning " and child-initiated play in the presence of teachers circulating and available to engage.

Schools that have adopted full-day kindergartens have found that not only does the school day allow for child-initiated exploring and structured play, but, when planned accordingly, can actually set aside more time than traditional half day programs. Ironically, rather than exhausting the young students, as critics feared it would, the full day provides them with more relaxed playtime in addition to periods of enriched instruction in reading, math, science, music, and art. However , the future may prove problematic for half-day kindergarten teachers in states that adopt Common Core Standards. This vigorous policy initiative requires students to take yearly examinations intended to prove mastery of math and literacy skills as dictated by grade level.

An Added Challenge for Half Day Teachers

As the National Association for the Education of Young Children (NAEYC) points out in their brief, Variations in Children's Experience of Kindergarten and the Common Core, Common Core sets specific academic benchmarks for kindergarten students, and expects them to reach them without regard to whether they attend an all day or a half day kindergarten; or as the authors put it:

With the implementation of the Common Core, kindergarten will mark the first year in children’s lives when expectations for children’s development and learning (in English language arts and mathematics) will be common across most of the country. Put another way, the output of the education system in kindergarten (the Common Core State Standards) will be the same, despite structural differences in how kindergarten is provided and despite differences in selection of curricula, formative assessments, and professional development from state to state, district to district, perhaps even school to school.

While these words may strike fear in teachers of all day kindergartens, it poses a logistical nightmare for half day kindergarten teachers. It means they will have to find a way to provide a day that provides their young charges with academic instruction geared to their level of understanding and mastery, while also allowing time for free play and experiential learning - activities that contribute to children's social and creative development while giving their brains a break. Perhaps they'll find the answer if they take a page from the all day teachers plan book, so to speak, structuring each day in chunks of group work, individual work, and whole class sharing and instruction.

As the class of 2031 makes its way through kindergarten this year, it is well to remember that, in the end, it's not the length of the day that matters, so much as how the time is used. For this age group, a full day of academics, no matter how long, is inappropriate. But with standards being what they are, the whole time given over to movement and free choice is inadequate. The answer to an academically age-appropriate kindergarten program that meets children's social and emotional developmental needs is a curriculum that takes into account that one child's needs may differ vastly from the child sitting next to him, and this allows for critical teacher/child interactions. But in end, it is the family and child’s situation that impacts the benefits of kindergarten, whether full or half day.