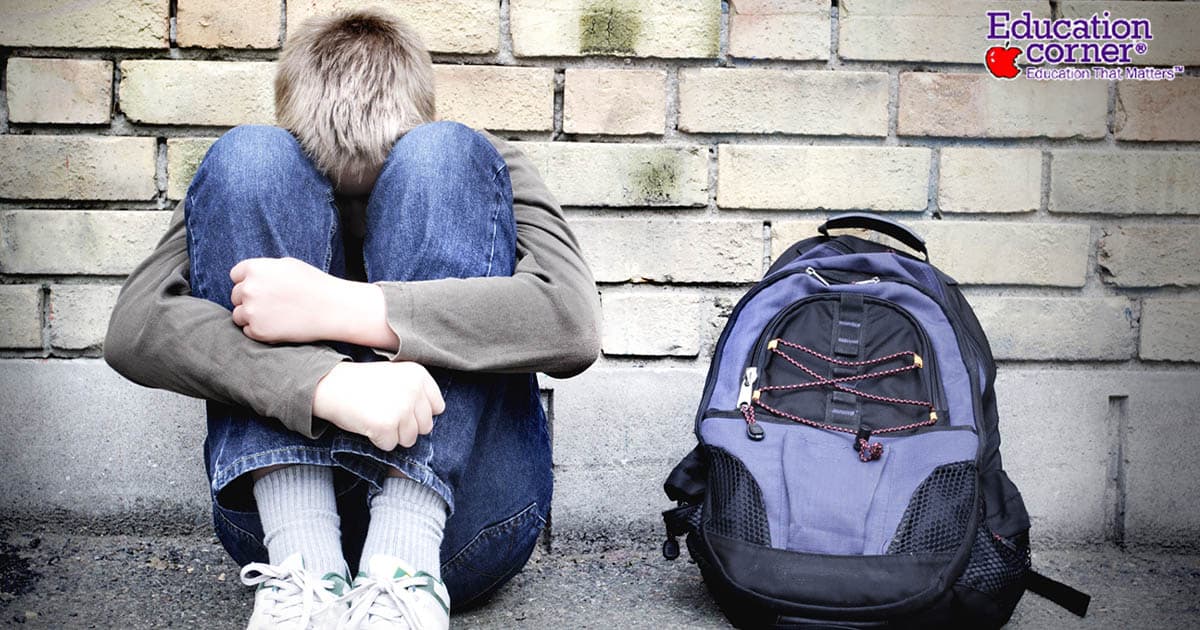 Bullying is an epidemic. It is rampant, widespread, pervasive and the effects can be catastrophic. It occurs in our communities, in our schools – and sadly – even in our homes. Bullying statistics are staggering, scary and merit serious consideration and immediate action. Consider the following:

2National Center for Education Statistics and Bureau of Justice Statistics

Where Does Bullying Occur?

The majority of bullying occurs at school, outside on school grounds during recess or after school, and on the school bus – or anywhere else students interact unsupervised. Bullying may also occur at home between siblings or in the community where kids congregate. Cyberbullying takes place online and via digital communication devices.

According to one statistically significant study, middle school age students experienced bullying on school grounds in the following locations:*

Currently, there aren't any Federal anti-bullying laws. However, state and local lawmakers have taken steps to prevent bullying and protect the physical, emotional and psychological well being of children. To date, 49 states have passed anti-bullying legislation. When bullying moves into the category of harassment, it then becomes a violation of Federal law. Criminal code as it relates to bullying by minors varies from state to state. The map below shows the states that have established anti-bullying laws, anti-bullying policies, and both anti-bullying laws and policies. 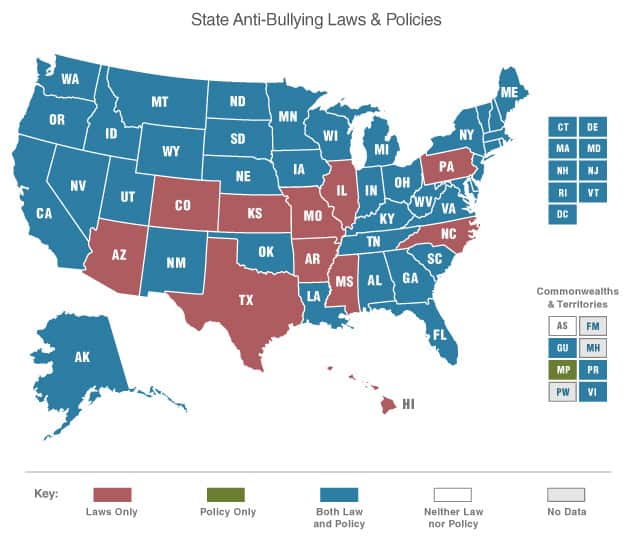 What Can We Do To Make Schools Safer?

Dealing with feelings of school safety, and specifically addressing school bullying, requires a multi-pronged approach. One of the first steps in preventing bullying is teaching students about it and discussing what their rights are at the school. There are multiple ways to do this. The internet and library can be used by students to research bullying, what it looks like, how to prevent it, and how to respond. Of course, learning about bullying also requires for school staff to step up. It's important to have presentations on what bullying looks like and teach students about how it can hurt others. Schoolwide presentations and classroom discussions can both be used as a means of teaching students about just how bad bullying can get.

Teachers might also want to use alternative approaches to exploring bullying. For instance, in some cases, teachers can turn to creative writing to help students express how they feel when they get bullied. Poems, sketches, and stories can all be written that explore bullying and its effects. This creative exploration doesn't have to be limited to writing. Artistic works can also be created that explore the bullying phenomenon. What's important is that teachers give students the space to explore their feelings on the matter and guide discussions around the topic.

Of course, responding to bullying requires more than just exploring the feelings of students. Concrete actions need to be taken to prevent bullying before it starts and stopping bullying when it happens. To that end, staff training is an incredibly important part of stopping bullying. It's important for not only teachers but all members of a school's staff to be familiar with the policies regarding what to do when they see bullying. Teachers may often step in to address bullying in their classrooms, but other members of staff may be at a loss about what to do when they witness bullying happening. For this reason, it's important that administrators review school policies toward bullying with all members of the staff.

It's also important to be aware of the school climate and how students feel about going to the school. For this reason, it's important for administrators to occasionally perform a schoolwide assessment. These assessments can range in frequency and in what they cover so long as the assessment accurately gauges how the student body is feeling about bullying at that time. A simple survey may be able to pick up on feelings of fear that are circulating around the school. Administrators may even be able to pick up on hot spots around the school where bullying is happening if they ask students to provide information about parts of the school they feel unsafe at. In this way, administrators can at least learn about where to concentrate staff so that bullying goes down.

Stopping bullying goes beyond just what happens within the wall of a school though. It's also important for teachers and administrators to engage with parents and the surrounding community. It's important to reach out to parents to discuss what's happening at the school and what they can do to help. Sometimes, this may mean having conversations with the parents of students who have been bullied. In other cases, it may mean that administrators and teachers hold conferences with students who have bullied. Keeping an ongoing level of communication between the school and parents is one of the most effective means of addressing these problems early, rather than letting them get out of control. This can be particularly helpful when bullying is spotted, since it may mean the bully is having troubles at home that their parents can address.

Within the community itself, schools can partner with groups like mental health specialists and other neighborhood associations. These groups can provide services, from counseling to role models, that might help to curb bullying behavior or inspire students who have been bullied. Community members can be introduced into the school in such a way that students form powerful partnerships with these people. Bullies can learn from older individuals and see how their behavior will lead them down the wrong path. The bullied can be shown how to respond to bullying and take advantage of school resources so that they don't have to feel scared. Even simply introducing a local police officer into the school for a one day discussion may help to change how students feel about bullying.

When bullying does happen, it's important that schools not avoid addressing the issue. With all members of staff aware of the consequences of bullying, it's important for them to step in and intervene the minute that they see something dangerous happening. If two students look like they're arguing or about to get violent, steps need to be taken to separate the students immediately. Once the two students have been separated, staff need to make sure that everyone is safe. If anyone's become hurt, then they need to be treated immediately. At every step in a bullying incident, it's important to remain calm and document everything that happened.

What staff doesn't want to do is ignore the problem. Ignoring bullying leads to tragedy, with students sometimes going so far as to harm themselves if they feel nobody is helping them get beyond the bullying. A bullied child should be allowed to speak in private about what they saw so that they don't feel pressured by the bully. A bully and the bullied also shouldn't be forced to make up immediately after an incident has happened. This may actually make the bullied feel worse. Instead, they need to be allowed to have time apart while an investigation gets underway. In only a few rare occurrences should the police be brought in, but don't hesitate to get law enforcement if there's a threat of serious injury. If a weapon is involved, sexual abuse is occurring, or some sort of severe physical injury has happened, it's important to get professional help right away.

10 Steps to Combat and Prevent Bullying

Bullying is becoming an epidemic. So how do we stop it? There have been many suggestions over the years, yet bullying is still on the rise. Below are 10 basic, yet proven, steps you can take to combat and prevent bullying in your school, community, and even at home.

Quite obviously, bullying can be a massive problem. Although it has declined over time, it still affects so many students that it leaves a negative impact on our schools. Student grades start falling and students themselves stop attending school altogether. However, schools can address this by collecting data on what's happening inside of their halls. Partnerships can be formed with community members that inspire students to better behavior or inspire them to find help when they need it. By adopting multiple strategies to bullying, schools can position themselves so that they deal with bullying before it has resulted in anything tragic.