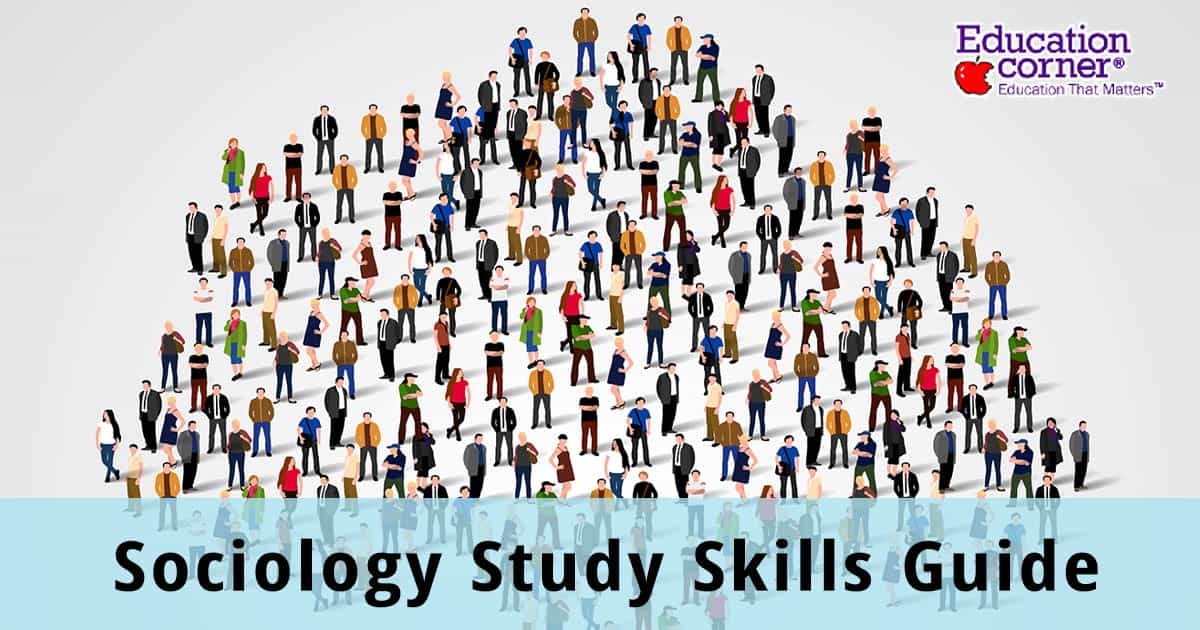 How To Study Sociology

Sociology is the field in which researchers try to understand human relationships and larger institutions. Because of this, sociology focuses sometimes on small scale issues, while at other times it focuses on large scale relationships. The study of sociology can include everything from the study of  small human organizations, like families, while at other times it involves the study of crime or organizations such as religious institutions. Small sociological studies can examine the small matters of life. Romantic relationships, race and gender identities, and the impact of aging are other issues that sociology focuses on. At  the same time, it can examine the impact of poverty, wealth, and education. Sociology is an interesting field, and preparing for sociology means being ready to tackle the study of relationships both large and small.

Getting ready for class starts at home. Too many students arrive at school feeling rushed or as if they did not have enough time to prepare. There are simple ways to avoid this. First, get your clothes ready for the week instead of rushing to put them together the day of class. Also make sure that you organize all your materials for class the night before school instead of the morning of. By waiting until the day of your classes, it’s more likely that you’ll end up running late as you try to get all of your materials together.

By getting your clothes and materials ready the night before class, you leave room for other important things when you wake up. With the extra time available, you’ll be able to enjoy breakfast without skipping on your morning meal. Considering how important it is to have the necessary energy for studying, this will be a big bonus to getting ready the night before class. You’ll also have extra time for your morning routines, like showering and brushing your teeth. Plus, you’ll have the added bonus of just not feeling rushed. Without the additional stress of having to rush to class, you’ll be well prepared to focus on your studies when you arrive at school.

Note taking in class, especially when there is a lot of material, requires being able to effectively record lots of information. Sociology is a big subject that involves the discussion of lots of theories. So, one of the best approaches to note taking in sociology courses is by using the outline method. This method involves organizing subjects by main topics, sub topics, and supporting facts. The main topic line is the central idea that you want to remember. For instance, in sociology, you may be studying a theory. The sub topic in the study of sociology may involve one of the researchers who developed the theory. In other cases, the sub topic might be a specific sociological study. Finally, you third line will be a supporting fact about your sub topic. For instance, you may want to include a fact about the researcher, such as when they developed the theory . Or, you may include a fact about the study, like its results or how many people participated in. When listing supporting facts, include only the facts that are central to the sub topic and don’t include unnecessary information.

A similar approach involves using the Cornell Method. The Cornell method involves using a series of four sections. The first section includes the subject of your notes at the top. The second section involves a column to the left where you can write keywords and short comments. This is where you would record terms like postmodernism or functionalism. The third section to the right, a larger column, includes your main body of notes. This is where you would go into great detail about your keywords. Finally, the fourth section at the bottom should include a summary of all of your notes in a few key thoughts. The Cornell Method has been found to be very effective because the left column lets you review your notes at a glance while the right column lets you see detailed notes about critical concepts, while the summary at the bottom is where you can quickly review what the point of the section is. The one big downside of Cornell notes is that it requires you to format your paper into four sections, which might require you to take time out before class to make the necessary preparations.

In the field of sociology, there are four central theories that underlie the field. It’s important to understand these theories because they each influence how information and observations are interpreted. Researchers observe the same situations but interpret them differently based on these theories. These sociological theories sometimes attempt to understand society from a wide perspective, by understanding organizations, and at other times try to understand how societies operate based on how individual humans conduct themselves.

Structural functionalism attempts to explain why society works the way it does. In this theory, social institutions are considered some of the most important forces behind why society operates the way that it does. As such, it takes a wide view of society that focuses on large organizations.

Large organizations help maintain norms between different individuals who are members. It should be remembered that simply because there are norms that people live by, that doesn’t mean the norms are considered acceptable by large parts of the population. Racial discrimination against ethnic minorities was once a norm in the United States, but extreme pushback eventually forced institutions to change how they operated. While the institutions operated by racist doctrine, they were able to pass along norms that approved of racist actions. Since these institutions have been forced to change, they have no longer been able to pass along and reinforce norms that approved of discrimination against minorities.

Conflict theory suggests that both individuals and groups get into conflicts. These conflicts occur over the limited resources available to people. As people get into conflicts, they change the society around them, including the large institutions that exist within those societies.

There are many assumptions that underlie conflict theory. Sociologists assume that humans interact and inevitably come to compete over limited resources, which creates resulting changes in society. Those who win the majority of the resources then take steps to limit those resources to themselves. This creates inequalities in society for generations. How much inequality exists differs from one society to another, though. Finally, when those inequalities create a certain level of dissatisfaction, people revolt and try to overthrow the existing power structure.

Social inequalities and attempts to overthrow them can be seen throughout history. Legal racial discrimination led to the Civil Rights movement while money inequality led to the formation of unions that fought for higher pay in the 21st century. Another example is how women vote for and win the right to vote, acquiring the power to influence politics in a way that they had never been able to do before.

Feminism views society from the perspective that men occupied a privileged position and that women of all backgrounds have traditionally been disadvantaged compared to men. Although feminism can fall under conflict theory, its importance over the last few decades makes it important to know. Feminist perspectives have contributed to some of the largest changes in society over the past century.

Feminist interpretations of society typically portray existing institutions as part of a larger, institutionalized system of oppression. Throughout its history, feminism has been modified to integrate new concepts, such as globalization and postmodernism. For this reason, feminism is often described as having occurred in waves.

Since the experiences of women can be diverse, feminism has attempted to integrate multiple perspectives into its view of an oppressive society. Over time, feminism has attempted to better integrate the perspectives of women from ethnic minorities as well as integrate queer theory. Since different institutions can exert different kinds of oppression, feminism has tried to address all these oppressive institutions. While all women may have been restricted from voting a century ago, it was black women who were forced to dine in separate restaurants, as just one example of how diverse the experiences of women are. By better integrating all these views, feminism has become a more robust theory that better explains how gender roles have created power disparities in society.

Symbolic interactionism is distinct from other theories because it places an emphasis on how humans are distinct from animals. This distinction is made on the basis that animals instinctually react to their environment. Humans, on the other hand, can pause and interrupt their instinctual reaction in order to think through other possible responses. Humans don’t always stop to make these considerations, but the important point is that they can.

What does this have to do with sociology? Among animals, groups come together on the basis of instinct and biology. Humans, on the other hand, think about the groups they will join. They’re conscious of the people they surround themselves with. Within these groups, humans are distinct from animals because they try to understand the intentions and thoughts of those around them. Humans also base their own reactions based on what they believe others are thinking.

A final distinction between animals and humans is that humans assign meaning to symbols. However, this meaning is created within the influence of a group. The meaning of a symbol is shared between group members. Human behavior is social because humans learn what certain actions represent and think about how others will react to them if they take that action.

You might think that by being prepared, taking effective notes, and understanding the basics of sociology, that you’ll have done all you can to succeed. However, it’s also important to remember that there are additional services that many schools offer that can help with your studies. For some students, this might mean tutoring services that are offered through teachers or teaching assistants. In other cases, this might mean additional materials that you can study online. Many teachers list the help that’s available in the syllabus. However, if you’re struggling to find help, make sure to talk with your instructor. Teachers want to help their students, and they’ll be sure to point you in the right direction for success.

In some cases, you may even be able to partner with your fellow students to increase your chance of success. In fact, this may be one of the best ways of helping ensure that you succeed in your courses. Partnering with others helps in many ways. First, they can share their notes with you if you ever miss a class. Second, your classmates can form a study group with you that can help you be better prepared for quizzes and exams. Study groups can compare notes to make sure all group members have recorded important concepts and ideas. This makes it all the more likely that you’ll be ready to ace your exam.

You might also be interested to take a look at our Study Skills resource hub for more study guides. Below you'll find more editor and user recommended study skills resources, guides and learning tutorials that will help you learn Sociology and improve your study skills.